GRINDING OUT A DECENT LIST ON THE COSTA BLANCA

I went on holiday near Benidorm last week and saw lots of tits.

Five species, in fact. And one of them was a first for me. More of that later.

Annie and I would have preferred to have gone to Mallorca to be honest, but we couldn't find a deal that appealed. In the end we settled for the Costa Blanca region, and enjoyed the use of a villa near the village of Finestrat up in the hills just 11 kilometres from Benidorm. It was a last-minute decision to grab a bit of late warm sunshine before the long winter ahead.

The villa was great, with a fantastic view of the nearby landmark, the Puig Campana mountain. The one slight drawback to the week was the reason for going there – the weather. It didn't turn out as hot and sunny as we would have liked. It was pretty much split down the middle, with three and a half days of sunshine and three and half days of cloud and occasional rain.

One day in particular was memorable due to a thunderstorm that delivered rain of biblical proportions, with torrents of water pouring down through the village as we were driving back from an excellent fish lunch in the coastal town of Altea. It was all a bit alarming at the time.

Before we left I obviously had a list of birds in my head I quite liked to see and had the impression the area where we were staying would produce a few decent sightings.

When we arrived, however, I soon realised that any bird sightings would have to be dragged out kicking and screaming. The reviews described the villa as peaceful, and it certainly was that. In fact, it was deathly quiet. Hardly a sound. Remarkably so. You could almost hear a pin drop. 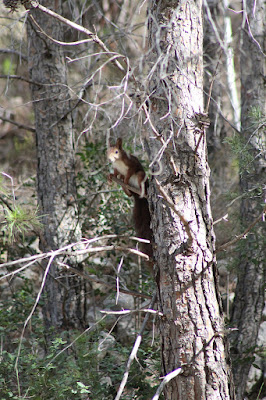 It was such a contrast to our amazing Mallorcan stay, which I will never forget. Maybe it was the time of year, I don't know, but during the first couple of days, I could only conjure up the odd Goldcrest,  Coal Tit, Long-tailed Tit, Chiffchaff, Blackbird, Robin, and a couple of Sardinian Warbler. The other wildlife of interest were a pair of Spanish Squirrel close by the villa.

The one standout during the first 48 hours was the distinctive call of a Crossbill, and out of the blue, eight flew over the the villa. They would be a regular feature.

Interestingly, as the week progressed, it was clear that raptor sightings were going to be very few and far between. In fact, the only birds of prey I saw for the entire week were two Kestrel (which I hoped would metamorphose into Lesser Kestrel) on the penultimate morning, feeding on insects high up around the villa.

But no matter. It is also amazing how, despite it being relatively quiet, the list of birds gradually built up as the week progressed.

Events began to improve considerably on Monday. Early that morning a Dartford Warbler called and then flew across the road above the villa, and I also heard another, possibly its partner.

The highlight, however, was the sighting of my first ever Crested Tit. Having not been to Scotland since I was 14, finding a Crested Tit was always going to a bit of an achievement for me. I saw this one during brief walk around the base of the Puig Campana rock. I heard the call first and then saw it flitting through the pine trees. Also, nearby I managed to find a couple of Firecrest.


A good morning then. During the second half of the week we tended to go on trips out of the villa down to the coast for lunch. We met up with a colleague of mine from the Express one lunchtime, who was also on holiday with his wife at the same as us up the coast in Moraira. It was noticeable how the weather along the coast was significantly warmer and drier than the surrounding hills, and seeing as we so enjoyed eating beautifully-prepared freshly caught fish, we made a habit of indulging ourselves for the remainder of the holiday.

Altea was a favoured destination, and we ate in the same place – a simple restaurant frequented by the locals (always a good sign) called Hotel San Miguel. Bloody brilliant it was, too. The Paella was amazing on our last day.

Oh yes, bird sightings. Well, on the coast there were plenty of Yellow-legged Gull and the odd Shag.

On one lunchtime, I convinced Annie it would be a good idea to travel a bit further as a detour to visit Calpe and Las Salinas de Calpe.
The Salinas is a lake in the middle of town that is home to a large number of Greater Flamingo. I quite fancied seeing these, and also lived in hope of seeing a decent gull or two. 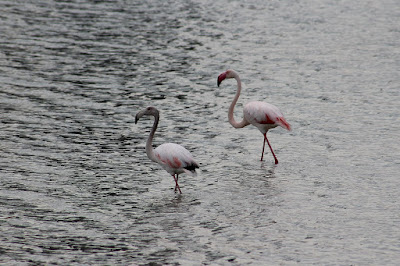 As it turned out, I struck lucky. Having not come across one in Mallorca, I was delighted to find a solitary Audouin's Gull standing on a small platform on the lagoon. A bit of a result and another lifer. 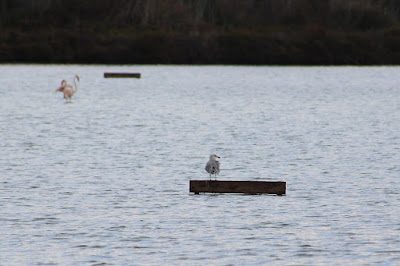 There were at least 40 Greater Flamingo on the lake, as well as a Cattle Egret, three Black-winged Stilt and couple of sleeping waders, which I think were Knot. On the edge of the lake, there were four Stonechat and a couple of Cetti's Warbler called out. As I went to get back into the car, I noticed a male Black Redstart on a wire across the road.

It is amazing how, when you least expect it, you end up gathering a decent list. Our last full day helped considerably.

It started out gloomily and brightened up as the morning progressed. The regular pair of Sardinian Warbler called out and darted from bush to bush. The pair of Kestrel got my attention as I wondered whether these two may of the rarer variety. Unfortunately, my photos were inconclusive. Most of them came out as silhouettes no matter how much I tweaked them on Photoshop once I returned home.

Then there was a kerfuffle. A high-pitched trill of bird song broke the silence just up the road from the villa. I was pretty hopeful I knew what the species was, and by the sound of it there were many.

And sure enough as I walked up the road, about 30 Serin, all mainly first winter birds, flew up from a bank on the side of the road and flew off. Also among this throng were a large flock of Greenfinch, that also flew off over the trees.

A few straggler resolutely hung on to feed of whatever was enticing them, and while I managed to snap a few photos, they were all rubbish, as the one below demonstrates.

At lunchtime, we set off up the lane from the villa towards Finestrat on our way to our lunch destination when the distinctive plumage of a Hoopoe flew up from a small field of olive trees. Annie spotted a second one perched on a branch. Typically, it was the one time I didn't bring a decent sized lens with me.

We then headed off back down the road to Altea and on the way I noticed a bird fly up from the roadside kerb and perch on a rocky outcrop – a Crested Lark! Unfortunately I couldn't find a place to stop to get a closer look, but another lifer to the list.

So there you have it. While I was not one of the British birding community at Spurn or the Norfolk coast viewing some excellent rare bird species, at least my Spanish bird list ended up being filled with three lifers despite it looking like being a barren week.

Down at the coast a large dish of Paella was consumed, while I contemplated whether next year we return to this lovely coastline, but maybe a month earlier.