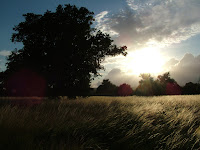 Having only had a sinus operation the day before, I wasn't supposed to venture out on Thursday evening. But I'm glad I did. I felt pretty good, so I took the opportunity to go for a walk. I was only going to go over to the Holmethorpe Lagoons and back, but by the time I got there I felt fit enough go further on and ended up at Spynes Mere.

On the way, I saw a few House Martin and House Sparrow, plus a Yellowhammer amd Whitethroat, but it was just a walk without much expectation of seeing anything out of the ordinary.

Once at Spynes Mere, I was counting the number of Lapwing there were on the sandbar, when... hang on, what's this? A wader. At first I thought it was a Greenshank, only because one had been sighted the day before. But this wasn't a Greenshank. I sent Graham James a text, explaining this wader had a reddish front, and after a brief call back he decided it was worth coming over to have a look.

To his, and my delight, it was the first Black-Tailed Godwit of the year at the Holmethorpe Sand Pits, and my 142nd species for Surrey in 2010 - my first new sighting for more than a month.
Posted by Factor at 00:34