A report flashed up on the Rare Bird Alert News and on the London Bird Club wiki site on Saturday morning that David Campbell (Devil Birder) had discovered a notable Surrey bird on his patch at Canon's Hill Farm near Banstead.

As it was my wedding anniversary weekend (18 years and counting) I couldn't get up there during the morning or afternoon but managed to squeeze in a couple of hours in the evening, arriving at the Farm at 5.45pm. Roy Weller was also on the patch waiting in the field where the bird had been heard and briefly seen during the afternoon. Unfortunately for David, out of the whole group who were present when the bird dashed out from cover, he was the only one not to see it. 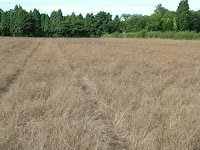 He wasn't alone, however, because it was neither seen nor heard while I was there. After about an hour or so, I left and went back at 8.30am this morning, and bumped into Dominic Mitchell, who reported that the bird was still in the field, singing regularly and also had made a brief appearance. David had already set up shop since 6.30am and had deservedly seen the bird.

After about 20 minutes or so, the Quaile (145) began to call again about ten feet from where we were standing. Quaile are notoriously difficult to see, and so it proved this morning. It sang constantly very close by but at no time did I manage to see it. However, while I would have preferred to have had a visual sighting, in this instance, being the secretive bird that it is, it apparently counts as a tick. I'm not altogether happy with this, but I'll take it at the moment! Well done to David, though, on a great find.