Well, I've just looked out of the window and it's suddenly turned into November out there. What happened to the past couple of months? Good to see the last remnants of what is commonly known as 'summer' on these shores is finishing pretty much how we all expected.

Bad news for the tan, but good news for birding. With a storm brewing over the Atlantic now rushing its way across the south of the country today and through the night we can expect a few wet, bedraggled and downright knackered migrants deciding to down tools and stick around for a while until the wind changes direction. That's the hope, at any rate.

That's also the deal when living in landlocked Surrey. You live in hope of a surprise visitor now and again. Waders pop in and out at random, so finding a jewel can feel a bit like squeezing blood out of a stone. You have to be ready in case they don't hang around.

While we wait eagerly for the rain (I can't believe I just said that - in truth I'd prefer it to be 28C and glorious sunshine), I managed to get up reasonably early and travelled to Staines this morning. The Reservoir was uneventful, although there was one juvenile Common Tern on the shoreline that caused some interest.

Bob Warden, who I hadn't bumped into for quite a few months, was also present and he explained how the youngster, who had been reared from a nest on the ramp in the middle of the north basin and couldn't yet fly, had fallen into the water and drifted off until it eventually ended up by the edge of the basin and on terra firma. There it has stayed for the past week. Fortunately, its parents are still feeding it and so the little fella is in good shape. 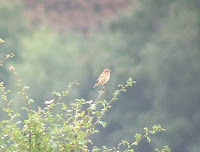 That was it as far as the Reservoir was concerned. A Dunlin had been the only wader to touch down momentarily earlier in the morning, but it flew off just before I arrived.

Off then to Staines Moor, which proved to be far more productive. There were umpteen very active Whitethroats and Willow Warblers dotted around on the walk down to the Moor itself, where after a long trudge around the perimeter I discovered a Kestrel, two Little Egrets (often found here), two Whinchat, a couple of Wheatears, plus plenty of Meadow Pipit.

We now wait to see what the weather brings.
Posted by Factor at 13:03