Seeing as it was such a beautiful day, Annie and I took the afternoon off. I thought it would be interesting to go and visit my old stamping ground at Tilburstow Hill, South Park and Wychcroft, near Bletchingley.

We decided to have a spot of lunch at the Fox and Hounds, just down the road from Tilburstow Hill Farm, where I lived for 12 years from the age of eight (c1965). The pub was my regular drinking hole as a long-haired art student, although the beer wasn't great in those days, unlike now.

The food at the Fox was first rate, too, and unlike many good pubs around this area, it is served from 12noon until 9pm. I had duck, while Annie had a fantastic rabbit pie - both were really good meals and not extortionate.

We then drove to South Park and Wychcroft, which is off the beaten track from Rabies Heath Road on the way to Bletchingley, and parked the car.

All this area used to be part of the 1,500-acre farm estate when my father worked there, but years later it was sold off. Tilburstow Hill Farm, for example, which then was used as a calf-rearing facility and for farm equipment maintenance, is now a series of dwellings. The entire area is a beautiful place to be on a late summer afternoon and the walk we went on, from South Park down to Lower South Park and across country back to the car took two-and-a-half hours. It was probably the most enjoyable walk we had been on all year. 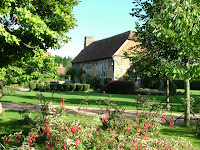 As far as birds are concerned it was relatively quiet apart from numerous Wood Pigeons and the odd Stock Dove in the harvested cornfields, plus a mass of Jackdaws, Crows and, a welcome sight, Rooks. The Rook is one corvid I have struggled to see many of in Surrey but there were plenty of them feeding along the way. Earlier I had spotted a Sparrowhawk and then a pair of Buzzards circling and calling overhead. A couple of Kestrels were also on the lookout for food. 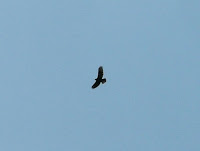 Another bird noted was a Grey Heron standing in a paddock, which didn't seem an ideal habitat for it. I could go off on a tangent and discuss Herons, but more of my thoughts on that subject at a later date.

All-in-all and very satisfying and peaceful afternoon.
Posted by Factor at 20:44