A CHANGE OF ATTITUDE

It had been two weeks since I had ventured out for a good day's birding. Normally, I would plan a trip around various spots in Surrey in the hope of adding to my Surrey list, but with a couple of weeks off to think about things, I've come to the conclusion that focussing on lists is a sure-fire way of diluting ones enthusiasm for looking at birds.

After all, the whole point of bird-watching should be to enjoy what you are looking at rather than, as has been increasingly the case for me and undoubtedly numerous other people involved in this hobby, blindly collecting ticks. What happens is you go out expecting, or hoping, to see one specific species, and if after a few hours you don't see it you return home dejected and you can gradually lose heart. There's no fun in that.

Also, if you become embroiled in a chase to get more ticks than someone else, that can lead to optimistic sightings which are, at worst, misleading and inaccurate, and detrimental to any historical record being logged. 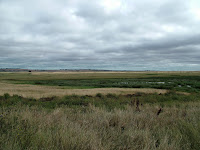 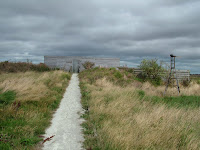 That is not to say I won't go and twitch a bird I haven't seen before in the area, it's just that I'm not going to focus on that aim. So, with that in mind, I went to Elmley Marshes on the Isle of Sheppey for the first time yesterday.

My birding mate Graham James suggested it might be worth a trip and he was right. However, for those who have yet to visit this vast RSPB reserve, don't travel without your walking boots. Once you have driven to the car park - in itself a 2km drive across the flatlands of the sight - it is then another 2km walk to the first of five hides. Once there, of course, it is well worth the visit.

On the way to the first hide I spotted one of the birds I really wanted to see here - a Marsh Harrier. A majestic bird that flew low and into a very keen wind before gliding down behind the sea wall and out of view. It was a sight that would occur frequently during my visit. On the pathway I came across a number of Meadow Pipits, Yellow and Pied Wagtails, plus one Wheatear that flew up and landed in some long grass in front of me.

Once at the hides the variety of birds on show was top notch. Avocets breed here and while I haven't seen one in Surrey this year, I had more than 40 feeding in front of me here. Other birds of note were eight Whimbrel that flew in, while there were at least six Snipe on view, four Little Egrets, two Ruff, one Knot, one Redshank, one Dunlin, two Common Sandpiper, two Little Ringed Plovers, a Hobby in the distance pursuing a Swallow and plenty of Ringed Plovers and Black-Tailed Godwits. Unfortunately I arrived too late to see a Spotted Redshank and a couple of Little Stint. Maybe next time.

The Reserve covers a vast area and I was interested in venturing further to Spitend Hide, which was 1.5km further along the route. When I asked another birder whether it was worth the long trek he gave a wry smile and said: "I don't know. I come here regularly and haven't been there for more than two years!" I gave it a miss.

A really good day out ended with the sight of three Whinchats sitting on a fence, clearly preparing for the long journey south, although they didn't hang around long enough for me to get a photo.
Posted by Factor at 11:18