Another sunny day and another morning on the birding trail. After being stuck in traffic on the M25 I got to Staines Reservoir at 8.30am, having listened to a discussion on Tony Blair's autobiography on Radio 4. Seeing as he's made plenty of money out of his time as PM, I'll probably wait until the tome arrives at Redhill library before reading it, rather than buying a copy to add to his already bulging coffers. Sounds compelling, though.

Using Staines as a Surrey listing site causes some conjecture. Ace Beddington and Surrey birder Johnny Allan, for one, doesn't count this area as part of Surrey for his list. He uses VC 17, which is based on the Surrey border before Spelthorne became part of the county in 2000. For me personally, so long as the Surrey boundary as it currently stands includes Staines, I'll include it for listing purposes. I suppose it is down to personal preference.

It was a good morning. My first spot was a Peregrine Falcon sitting at the top of a pylon between the Staines and King George VI reservoirs. It was clearly not in a hurry to go anywhere, so I got good views of it. A couple of other birders were on the causeway, and they saw a Kingfisher and a flock of Dunlin pass through. I just missed those, but I did get two Ringed Plover (146), which flew in and landed on the south basin.

What a relief. These birds aren't difficult to find, but I hadn't had them yet, so to find two here certainly made the trip worthwhile. The reservoir was relatively quiet apart from the usual suspects (Comorants, various ducks and Crested Grebe), but there were at least 10 Sand Martins feeding, plus a Common Tern and a few Yellow Wagtail on the east bank of the KGVI reservoir that were flitting around some grazing sheep. 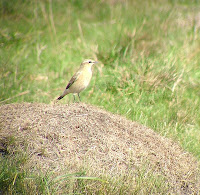 I always end up migrating to Staines Moor. It's a place where something good usually turns up. The first sighting was of a Wheatear, plus a couple of Kestrel, one of which was causing havoc with the local bird community in its attempt to catch a prey.

The main aim of going to the Moor was to find Yellow Wagtail. Although I have one already for my Surrey list this year, it was only a single bird flying overhead one evening, and I couldn't honestly say I would have known it was a Yellow 'Wag' unless top Holmethorpe birder, Gordon Hay, had pointed it out to me at the time. I saw plenty at Oare Marshes last month, but that was in Kent and I just wanted a confirmation of a Surrey sighting close up for my own peace of mind.

After a couple of Little Egret flew off and I past about 30 Swallows feeding by the river's edge, the first of eight Yellow Wagtails came into view in amongst some horses and cattle on the opposite bank. I managed to get good views of them, so job done.
Posted by Factor at 15:40