You'll have to put up with one more post where most of the subject matter has nothing to do with birding, but stick with it.

It's been a hectic weekend, and not all for the best of reasons. Saturday was a very good day, in as much as I spent most of it travelling to Coventry to watch the BriSCA F1 Stock Car World Championship final.

I've been involved in the sport on and off for many years. I was editor of Motorsport News ten years ago, and while on the paper I did my utmost to give it as much publicity as I could because, as far as I was concerned, F1 stock car racing was, and still is, one of the most exciting sporting spectacles you'll see anywhere. I also wrote and self-published a book on the subject back in 2000 called The Sound and the Fury.

If you've been watching Gears and Tears on BBC1 on Monday nights (the last part of the series is on tomorrow evening at 10.35pm), you'll be aware of the rivalry between two families - the Smiths and the Wainmans. I know both families really well and I caught up with them on Saturday night. As for the race, it was Andy Smith who came through to win his third World title in a row.

I have also got to know the producer of Gears and Tears quite well, and I have an idea for another fly-on-the-wall series which I intend to put to him at some point, this time about birding. I'm not going to say much about it yet (I don't want anyone pinching my idea) but I'm putting some feelers out to see whether it has legs (or should I say wings).

So that was Saturday. I came down to earth with a bump today, however. Out of the blue, Annie was in terrible pain from a kidney stone and spent most of the day in A&E at East Surrey hospital. There are few more painful experiences than suffering from a kidney stone, apart from perhaps missing a rare bird drop down on your local patch.

Joking aside, I felt really sorry for her, particularly because she's had them before. She's back home now, and a darn sight more comfortable than earlier.

Did that mean I decided not to go out for a spot of birding? Shamefully, I have to say no, it didn't. My birding mate Graham texted me again recently about an owl that has been seen at dusk just south of Spynes Mere, near Mercer's Farm. 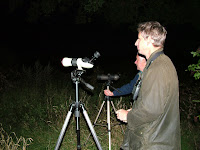 I went up there tonight, but thought it was probably too dark to see anything. As it turned out I spotted Graham and Gordon over by the corner of the cornfield next to the horse paddocks at the farm. They had been positioned there for quite a while and hadn't seen anything. Usually, I'm the Dipmeister General in these situations, but luckily, within about ten minutes Gordon spotted the Barn Owl (148) flying south low over the field and out over a hedgerow.

It was the only sighting we got, but it was enough for the time being. I'll be back to get a better view during the week.
Posted by Factor at 22:46