NO DIP, BUT NO REAL GLORY EITHER 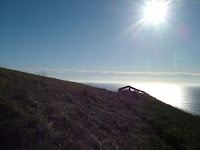 I took the metaphorical plunge at 5.30am this morning and headed off for the Sussex coast and Beachy Head. I was anticipating a number of new sightings, one of which had been highlighted in the area the day before. It all started out well as I belted down the M23 under beautiful blue skies as the sun appeared - not necessarily good for birding, but certainly good for the soul.

I wasn't sure what to expect from a trip like this, particularly as I only had a morning to cover a vast area that I'd never been to before specifically to search for birds. I had all manner of exciting migrants visualised in my head that I might come across.

In just over an hour (I didn't hang about) I was parked up at the Beachy Head Countryside Centre, having already seen five Wheatears, plus a Whinchat on the fence by the roadside.

It was windy, as expected, and confusing. Why? Too much wind, for a start - my eyes were watering. And there was just so much activity, it was hard to take any of it in. There were more Wheatears here, for example, than I've ever seen in one place before - already there were about 15-20 in the grass by the cliff footpath. Dozens of Meadow Pipits skipped overhead, a couple of Redstart settled in a bush.

But it was the warblers, loads of them, that had me in a daze. I just couldn't get a handle of them. They just wouldn't KEEP BLOODY STILL. Everywhere I looked was frenetic, like Heathrow airport on a bank holiday, save for one species of bird, the Spotted Flycatcher. I often come across these great little birds - they keep still for one thing, which means they are always obliging when it comes to photos. So it was today.

Eventually, after spending too long in one place, I drove down the hill a short way to the Cliff Edge car park. This was more like it. Sheltered from the wind, and fantastic views. Calmer. Also more Spotted Flycatcher, one here living up to its name and catching a fly.

It was here a bloke parked up on his motor bike and came over and had a chat about how brilliant this place was, and had I seen much. He was friendly and polite, but in my mind all I thought was "will you bugger off!"

I was obviously distracted and eventually he did wander back to his machine, but not before mentioning that he had seen a number of birders congregated down the road. I knew what they were looking for.

So, a few minutes later I had parked at the Horseshoe Plantation car park. Ignoring a couple of birders staring at a bush, I walked up the path heading east and came across a young chap and his mate. I asked if he'd seen much, including the Bunting everyone would be looking for, and he said, yep, he'd seen it (you should have been here half an hour ago...) but the bird had flown off into the adjacent field.

After watching what looked like a cloud of House Martins swarming round the lighthouse at the top of the hill, a Raven mobbed by some crows, a few Stonechats, Whinchats, yet more Wheatears and more than 100 Meadow Pipits, I bumped into Dave Cooper, the man who had discovered the exciting sighting the day before. I followed him back towards the two birders gazing at the bush, to discover they had lost sight of it. After waiting for about 30 minutes it was clear the bird wasn't going to show, so I decided to go back up the hill and see what I could find there.

After watching more Spotted Flycatcher - I saw six in all during the morning - and a Sparrowhawk swoop into the shrub to a background of anxious chirping - I made one last trip back down the hill to the gathering of birders. Within minutes of my arrival the ORTOLAN BUNTING flew out from behind the bushes and back down into the field on the other side of the road and out of sight.

Everyone got a bit excited and scopes were perched on the side of the road in a vain attempt to see through a mass of vegetation - to no avail. In the end it took a flushing out exercise, not something I agree with really - if it intends to fly up it will of its own accord at some point, and if it doesn't that's just the way it is - which caused the bird to fly back round the side of the bushes again. 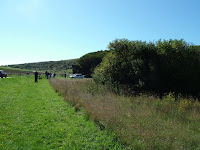 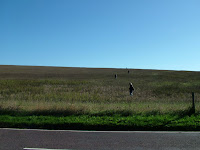 As time was running out, after another 30 minutes or so, I decided it was time to leave. I'd seen the bird, not brilliantly - it hadn't been very co-operative while I was there, but it was enough. Sometimes the twitch is a good one, other times it isn't. This was one of those when you don't go away clicking your heels...

For all of that, the morning had been a really enjoyable one - I'll definitely be going back there before the end of the month. I was intending to try and fit in Arlington Reservoir and Cuckmere Haven, but time had beaten me.

So, as per usual, once back at home I took another look at the Rare Bird Alert and Sussex Ornithological Society websites to discover more pain. The Bunting showed well in the afternoon, a Honey Buzzard flew over, as did some Lapland Buntings, and a Wryneck appeared on the footpath at the bottom of the hill. Added to which a Icterine Warbler made an appearance at Birling Gap.

Mind you, warblers are a nightmare - one looks very much like another. How on earth someone managed to confirm a sighting of this rare one halfway up a tree is beyond me.
Posted by Factor at 13:24