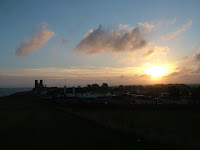 The alarm went off at 4.30am. Normally, I know where I intend to head off to but having looked at the map and the potentially good places for migrants, I was a bit stuck. I couldn't go too far because I had to be back by lunchtime.

Decisions, decisions... In the end I played safe and aimed for Oare Marshes again - the weather was expected to be fine, so I was sure to have a better day than Sunday. I had thought of Chichester Harbour and even Dungeness but I didn't want to spend ages getting my bearings at places I didn't know well.

Time had to be spent wisely - which is why I ended up at Reculver instead. It was still dark as I approached the turn-off for Oare, so I thought I'd drive on for another 20 miles. It wasn't a good move. A spectacular setting perhaps, but not knowing the best places to walk I ended up meandering around seeing very little.

Having looked at the Kent Ornithological Society website later I realised that Shuart, where they ring birds, is a good place to go. Maybe another time.

So, Reculver proved to be a time-wasting exercise and a costly one, too. By the time I got to Oare I had missed an Osprey flying over. It would have been a lifer for me but I know in time I'll see one, just maybe not this year. 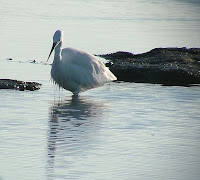 On Sunday I failed to see the White-rumped Sandpiper that had been at the Marshes for a couple of weeks, so today the rare little wader was high on my tick list. The sun was fully up by now, and with a light breeze the morning was perfect for me - no battles against the wind and rain today.

So, what did I see? Well, first off I had a Groundhog Day moment as I got out of the car. Right on cue, a Cetti's Warbler blurted out its song - just like on Sunday. I heard three during the morning. The next bit of good news was, having missed out on my two previous visits to Oare, seeing more than 20 Bearded Tit 'pinging' over the reeds. A good start to the visit.

Eight Buzzards circled overhead, along with a couple of Kestrels. Two Hobby also hung around for most of the morning.

Apparently, a Lapland Bunting flew over calling at one point, but I never saw or heard it - no change there then. The Sandpiper was nowhere to be seen at this stage, with two other birders on the lookout for it. The tide was out, allowing a few Curlew, Dunlin, Little Egret and plenty of Redshank to feed. More than 400 Golden Plover were also on the East Flood. 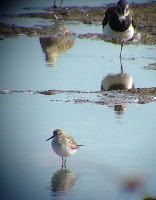 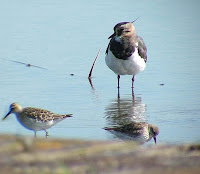 I wondered if it was going to be another dip day as far as the wader was concerned but fortunately it was relocated at the western end of the Flood. The WHITE-RUMPED SANDPIPER seemed to like hanging out with the Golden Plovers (and one Turnstone), occasionally attempting to get some kip before being shuffled out of the way.

Luckily, it gradually made its way over to the lane end of the Flood. When a Curlew Sandpiper dropped in, the White-rumped perked up a bit and joined its new mate to feed.

Initially, when I heard one of these migrant waders had dropped in at Oare, I wasn't that fussed. It looked, from the photos I had seen, a bit like a Dunlin - and who gets excited at looking at a Dunlin?

But I got quite attached to this cute little chap, watching him close up. It was really good to have such good views of a rare bird. Eventually, the surrounding Lapwings got cheesed off and shooed it away. It took flight and after a wide circle came down further away on the Flood. A good end to the morning.

I'm aware that I haven't spent much time recently discussing Surrey birding - which, after all, is supposed to be what this blog is about. Normal service will be resumed in the coming days, as I go on the hunt for local Grey Partridge. Oh, what excitement...
Posted by Factor at 18:54