MORE A VOID THAN A GAP 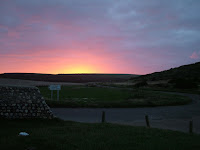 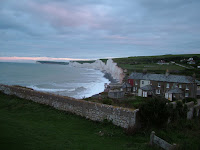 Another early start this morning, full of hope and expectation. By 6.30am I was pulling up into the Birling Gap car park as the sun tried to force its way through the cloud. It was cold and breezy, but a great place to be first thing in the morning.

I try not to imagine the birds I'm going to find on a trip like this, but my mind won't have it - Wrynecks, Ortolan Buntings, Lapland Buntings, Pied Flycatchers, a Honey Buzzard and an Osprey flying overhead, all these and more are waiting for me at the coast.

The reality very rarely lives up to the self-imposed hype. This morning was a good example. I walked across the hill and down to where the Ortolan Bunting was found on Sunday, and then onwards and up to the lighthouse at Belle Tout and down again and back to Birling Gap. Nothing, except plenty of Stonechats, a couple of Wheatears, two Whitethroats and hundreds of Meadow Pipits. It was colder than Sunday and windier, so that might explain the derth of migrants on view. No raptors either. Not one. 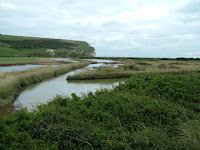 So, after a couple of hours I drove round to Cuckmere Haven, a place I had only visited once before on a geography field trip at school. It looked more promising. It was sheltered for one thing, and the first sight was of a Black-Tailed Godwit, then a few Wheatears. A walk along the river revealed a total of six Little Egret, a Knot and a first for me this year, a Bar-Tailed Godwit that was disturbed by walkers and flew off out of sight. Oh, and did I mention the hundreds of Meadow Pipits that flew over. 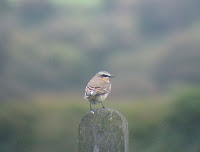 Once at the shoreline there were more Wheatears on the pebbles, gazing longingly out to sea, a Reed Bunting and plenty of Stonechats. There were also loads of Meadow Pipits.

But that was it. Bugger all. The long walk back to the car flushed out a couple of Little Egret and yet more bloody Meadow Pipits, but nothing else of note. Thank goodness for the Bar-Tailed Godwit and the photogenic Wheatears.

I shouldn't be surprised. Everyone suffers the same deflation now and again. I've read Birdwatch editor-in-chief Dominic Mitchell's blog recently about chasing round the London region missing three Osprey sightings in one day, and that would've have been enough to send some people - those who really are obsessed by their pastime - over the edge.

On the walk back to the car, Johnny Allan sent a text. The day before he sent one about a couple of Lapland Buntings at Beddington, but I was working so couldn't get out. Today it was a Pectoral Sandpiper that had landed at the Farm, but I was in Sussex and needed to get back home to do some work.

Once back at base, I put myself through more masochism by going to the Rare Bird Alert website to see what I could have been looking at, and right on queue, at Cuckmere Haven, a Lapland Bunting and - as icing on the cake - a White Stork dropped in just as I was driving away.

There was one ray of light. Annie sent me a text that made me laugh for the first time during the day. "So, did you see the greater-spotted put-washing-in-the-washing-machine catcher or the lesser spotted hoover," she asked. "Or maybe the seldom-spotted bathroom cleaner?"