KNOT A PROBLEM SPOTTING A CRAKE

Kojak, one of the Beddington crew, sent me a text at about 8.00am to say the bird was still there. So off I went to the Farm to try and get this elusive wader. Well, elusive to me, at any rate. Everyone who has gone to Beddington so far to see the Pec had come away happy birders. Wanstead birder and top blogger Jonathan Lethbridge saw it over the weekend, and Rich Sergeant from Tice's Meadow also had a successful visit yesterday.

I met up with Kojak just after 9.00am and we went to where the bird had last been seen. A tractor had since been positioned by the side of the bed and was pumping out water, making quite a racket. It was no real surprise, therefore, to discover that the bird had taken a hike.

Within half an hour I was starting to have one of those Groundhog Day moments. We trekked around every bed we could find more than once, and the Pectoral Sandpiper refused to reveal itself. It wasn't for the lack of trying. A total of four hours during the two visits had come up with a big fat zero - it was hard not to take the double dip personally. This bird clearly had it in for me. We even bumped into Marcus, the on-site ecologist, who had use of a four-wheel drive vehicle and we all got in and went to the farthest end of the site to see if the wader had gone elsewhere. But no. 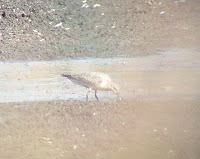 We had to give it up. The consolation was a Knot (150) on one of the lagoons. It was a fair distance away so the photo here is not that good, but never mind. The trip had been worthwhile, and Kojak, to his credit, couldn't have tried harder to find the Pec for me. I left the gang (Johnny Allan, 'Posh' Spicer and Kojak) at the hide and went home.

What a difference a few hours can make. It was mid-afternoon that I noticed on the Rare Bird Alert map that a Spotted Crake had been seen at Unstead Sewage Farm near Godalming. I then got a text from Kojak saying he was on his way over there to find it.

There was a potentially sticky problem for me, though, as Annie had been stuck at home all day and, seeing as it was a gorgeous afternoon for once, she wanted to go for a walk. We decided on Denbies Vineyard near Dorking. It was then that Kojak sent another text explaining he had good views of the Crake and gave directions on how to find it, which added to directions I had already found and printed off.

The sun was getting lower in the sky and I wasn't sure whether I could get Annie back to Redhill and then travel over to Godalming before it got too dark. Generously, she agreed to go with me - so I added a spot of dinner at a pub on the way back as a way of saying thank you.

We got to Unstead at 6.30pm and walked up to the hide. Brian, who looks after the keys to the hide and is the resident birder, was there plus another birder called Donald. Amazing. Within 30 seconds I got my first view of a Spotted Crake (151). Happily feeding on the water, the Crake couldn't have been easier to see. 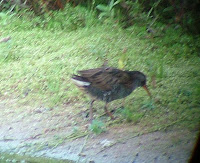 Then a little further back near some reeds, I got my first sighting of a Water Rail (152). A totally unexpected tick, but extremely welcome.

Normally very shy birds, these two were in no rush to hide in the undergrowth and we stayed for 15-20 minutes watching them before it was time to lock up the hide and call it a day. Surprisingly, the Spotted Crake had been at Unstead for the past ten days, but had only been announced this afternoon. Issues with certain members of the birding community meant Brian now felt reticent to reveal the discoveries on his patch, which have been plentiful.

It's a strange old business, birding. There are occasional clashes of personality that can get blown out of proportion and develop into feuds that can last a lifetime. One thing I intend never to do is to let this hobby take me over to that extent.

If I become a bitter and twisted old git in a few years time, you have my permission to tell me where to go.
Posted by Factor at 21:54