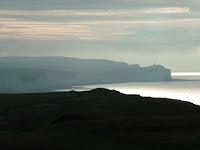 The past week has been frustrating. Friday was spent at Seaford Head, Hope Gap and Cuckmere Haven and while the walk was spectacular, the birdlife was scant apart from three Wheatears, about 15 Little Egrets, five Oystercatcher, a couple of Rock Pipits and seven Curlews flying over. 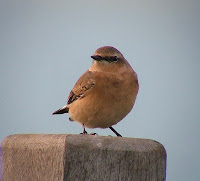 One of the Wheatear posed obligingly on a gate post. This was good because I plan to complete some bird illustrations before the year is out and the Wheatear is a nice bird to draw. 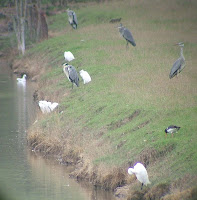 Saturday was spent in Wales with friends. It was a gloriously sunny day, if a bit on the chilly side, and also one where I discovered a vocal flock of Raven near Monmouth. They put on an impressive aerial display, but as they were on private farmland I was reticent to try and get closer to them. Before the year is out, however, I'm determined to get better views of these magnificent birds. Another potential illustration.

What a difference a day makes. Sunday was utterly miserable. I made the wrong choice of location, deciding to go to Oare Marshes for sunrise. The better option would have been to stay in bed. 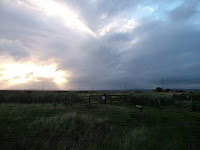 As I got out of the car I immediately heard a Cetti's Warbler announcing its presence, which was a promising start, but as I began my walk it was clear that the wind, which was relentless, was going to make birdwatching very difficult.

It started off badly. The wind was so strong, and my eyes were watering constantly, I could hardly see through the scope, which was being buffeted by the very strong north westerlies. I made the mistake of standing the scope on the footpath as I grappled with my bins for a second, and the scope just took off on a gust, crashing to the ground. BLOODY HELL!

Luckily, it wasn't badly damaged apart from a few scratches, unlike my binoculars which crashed against a metal gate, causing me to see double of everything when I looked through them.

It was hopeless. I walked the area as best I could, but it was clear the birds were bracing themselves against the wind and were locking up shop waiting for the gales and showers to subside - which they didn't.

So what birds did I see? A few Ruff, about 100 Redshank, 40-plus Avocet, Golden Plover, Grey Plover, Lapwings, Dunlin and Curlew, plus I heard another Cetti's Warbler. What I didn't see was the Spoonbill that had been present the day before, or the White-rumped Sandpiper. Both reappeared the next day. 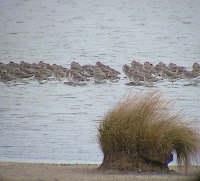 I was going to go home, but I was aware that most birders were heading to the Sea Wall Hide at the eastern end of the site to look out over the creek for seabirds. A perfect day for it, although most of the birds were well out of decent viewing range. Both the inside and outside of the hide was packed, so there was no chance of getting a break from the wind.

The best sight was of juvenile Gannets flying up the Swale Estuary - I saw at least 20 of them. Next up were six Great Skuas with a single Arctic Skua, high up and flying inland (I wouldn't have known what they were but a chap next to me pointed them out). Apparently, there was also a Long-tailed Skua and a Pomarine Skua going over while I was there, but I'm blowed if I could see them. 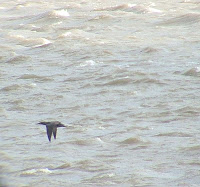 By midday, I'd had enough and left the hardy seabirders to there allegedly enjoyable day. I hadn't enjoyed it that much, it has to be said, and it was compounded by texts from Kojak announcing a Little Stint and Jack Snipe at Beddington - both of which I haven't seen this year.

I just have to admit I'm a fair-weather birder.
Posted by Factor at 14:37