I travelled over to Palm Bay, Cliftonville in Kent yesterday to take my parents out for lunch. Their birthdays are on the 14th and 20th of this month, and as I'm anticipating a busy work schedule coming up, a pre-birthday slap-up meal seemed a good option.

Still getting over the after-effects of her kidney stone, Annie thought it wise to stay at home, so I travelled on my own. As I had read good reviews - including from the hard-to-please Jay Rayner, the Observer food critic - I'd booked a table at Eddie Gilbert's Restaurant in Ramsgate.

We weren't to be disappointed. The restaurant is upstairs from the fishmongers/fish and chip takeaway, and the food was excellent. The menu was varied, from top-end Monkfish dishes down to fish and chips. I went for a potted shrimp starter, followed by battered haddock (cooked in beef dripping), chips and minted mushy peas. My dad had six oysters to start with (he'd never had them before so he thought he would give them a go) followed by grilled cod, new potatoes and veg, while my mum had cod and salmon fish cakes with new potatoes and mushy peas.

It all went down really well with a glass of nicely chilled Muscadet Sèvre et Maine sur Lie, and not too expensive either. We'll definitely go there again.

As birders will know, this coastline - especially at this time of year - is a potential gold-mine for unusual migrants and visitors. So, after our food had settled, we drove a short distance to the Sandwich and Pegwell Bay nature reserve.

I'd looked online at the Rare Bird Alert website map, and migration had started to really hot up in the past few days. Hundreds of Lapland Buntings had been sighted around the country, plus scores of Wryneck, Barred Warblers and an array of other rarities.

The visit was only relatively brief as my mum can't walk far, so she stayed in the car looking out over the bay. The tide was out and there were an abundance of waders feeding on the shoreline, including Oystercatcher, Black-Tailed Godwit, Whimbrel, Greenshank, Redshank, Dunlin, a few Turnstone, Ruff and Knot and up to six Little Egret. There were more birds, including gulls further out, but I couldn't say what they were. 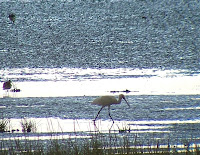 Within minutes, I had spotted a bird I had wanted to see in a while. A Spoonbill was feeding on the shoreline close by a Little Egret. Typical, really. I went to Oare last month hoping to find Spoonbill, but didn't come across one all day, and then here, without expectation, I find one almost straight away. 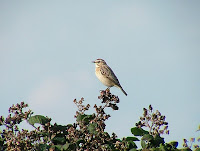 Great stuff. A further walk round came up with plenty of Whinchat, eight in all, plus Whitethroat, Lesser Whitethroat and another warbler in the bushes I couldn't identify. The walk was interrupted by a rainstorm that past through, and the deluge meant bird-watching was over for the afternoon.

Back at Palm Bay, I showed my dad the Rare Bird Alert website and map, explaining how you can find birds that are recorded during the day, and to my horror, right smack-bang where we had just been was a red star. A red star means a mega has appeared.

This mega, recorded just after 1.30pm (we had been at the site at 4pm), was a Fan-Tailed Warbler. Also recorded were five Glossy Ibises and a Lapland Bunting, plus the Spoonbill I had seen.

Bit of a shocker, this. Galling beyond belief to be at a site oblivious to rare birds probably around the next corner! As it transpired the Warbler had only been heard briefly. I would have liked to have seen the Glossy Ibis, though.