BRING OUT THE BEDDINGTON BUNTING 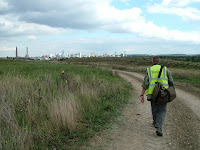 After yesterday's disappointments I stayed at home this morning to do something a bit more constructive - like earn a living - for a change. Gazing out of the window the sun was shining. I knew I had to go somewhere later in the afternoon otherwise I would be brooding about my lack of a good sighting the day before for the whole weekend, which was going to be spent at Annie's parents to celebrate their Golden Wedding anniversary. Not a good mixture.

So I sent Johnny Allan at Beddington a text. Having missed both of Beddington's two great Surrey ticks this week I had to know if they were still there. "Any sign of the Pec Sandpiper and Lap Bunts today," I asked, "or have they both left the Beddington nest?". A few minutes later I got a reply. "Both still here".

Great! I texted him back to say I would be at the site in about an hour, and he very kindly arranged to meet me. The journey took nearer two hours as I had to first drop Annie off at Kingston before travelling back to Hackbridge.

Traffic was terrible, but eventually I was walking up the path and met up with Johnny. He thought it best to look for the Pectoral Sandpiper first as it was easier to find. That was the theory, at any rate. But it was nowhere to be seen. It had been moving in between two of the many sludge beds and had been seen well earlier in the day. But not now. We walked around pretty much the whole of the north end of the site a couple of times, but nothing doing.

I had to shrug it off. It happens. I did have good views of a Ringed Plover and a couple of Greenshank, but the Pec had flown or was hiding somewhere. Johnny did say he had seen a Hobby very close by earlier, as well as a Sparrowhawk, and either of these could have forced the juvenile wader to move elsewhere. As it was, a couple of hours after I left, Johnny sent me another text to tell me the bird had been seen back on its favourite spot again. Such is life...

So, on next to the other side of the big landfill to the south eastern end of the 100-acre site. It took a bit of walking, and it was evident that Mr Allan, although a few years older than me, was a darn sight fitter. By the time we got to the area where the birds had been seen for the past two days I was knackered.

Anyway, the bins went out, the scope went up, and we looked to see if the little migrants were around. Nothing. Johnny suggested we wait ten minutes and if they didn't appear, he would walk the field and flush them out. He seemed confident.

So, after ten minutes Johnny walked the field. He was just coming to the area where the birds had been spotted when up they went, a pair of Lapland Buntings (149) flew up and did a few circuits of the field together before coming back down to land. Fortunately, they came down in an area where we could see them well. I think we were both relieved. A smashing little bird. 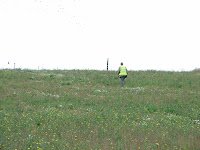 After a while we headed back and set off home. Johnny had been at the site for nine hours (11 hours yesterday) and I was eternally grateful to him for sparing two of those to show me round.

I certainly owe him one. Hopefully, Holmethorpe will come up with a good bird for me to return the favour.
Posted by Factor at 21:58