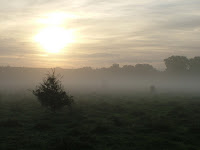 The Grey Partridge search was aborted this morning - mainly due to a phobia of being shot by a 12-bore shotgun. I had a brief recce earlier in the week and found the right farm near South Nutfield, and having spoken to a slightly bewildered old codger who worked at the farm, I gathered that both 'English' and 'French' Partridge (his description, not mine) were here. "They'll be scattered all over the place," he helpfully explained. The farm rear the birds and then once they are plump and old enough they are used as sport.

Now, I not sure whether a bird that is reared and then let to roam the countryside only to be blasted out of the sky actually counts as a Surrey tick (presuming I actually see one) but Gordon Hay - who gave me the directions to the area - didn't put me off looking for the birds, so it must do.

Anyway, I did see loads of the 'French' version (the Red-legged Partridge), but no Grey ones. Like I mentioned I didn't go looking this morning because Saturday tends to be the day the farm is opened up for a shoot. So the idea of skulking around the local fields only to flush out a Partridge in target range of a number of gun barrels didn't appeal.

So instead I went to Staines (again). After yesterday's wretched weather, the thought was the southerly winds might have blown a few waders and other interesting birds inland. 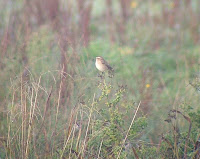 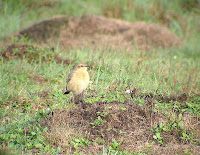 As per usual, this theory didn't work out exactly as planned. I didn't see a solitary wader during the morning, but at Staines Moor I did see a couple of Whinchat and the ubiquitous Wheatear - three in total. Photo opportunities were slim today, but, as always, the Wheatear stood around long enough for a few snaps.

On the walk back north to the car I also heard a Cetti's Warbler in the shrubs by the footpath.

Next up was the reservoir. I had a feeling all was quiet when I parked up, as there were no other cars around. Never a good sign. And indeed, the reservoir was quiet apart from two interesting visitors. A juvenile Black Tern was feeding on the water, dipping down as it flew in typical Black Tern style, so that was nice. Couldn't get a photo though with the scope, though. I tried umpteen times but failed miserably.

The other good bird was a 1st winter Little Gull, that eventually dropped down at the north end of the north basin with a few Black-Headed Gulls. The photo is not great but I had to get something to record the sighting.
Posted by Factor at 18:48