WHAT IS MORE SATISFYING? THE QUICK FIX OR LONG-HAUL REWARD?

The sun is shining and we are building up to an Indian Summer weekend, with temperatures into the mid 70s (I prefer fahrenheit as a temperature reference rather than this euro-friendly centrigrade business).

I won't be seeing much of it today, sadly, as work has me grounded. Having said that, I did think about going to Reculver early this morning, but decided against it. I often have a crisis during mornings where I have it mind to travel further afield to look for unusual birds. I worry that with time limited I'll go to the wrong place, but then how are you suppose to judge the best option?

This morning was a case in point. I stayed at home but a Honey Buzzard was seen over Reculver first thing, and if I had gone I would have seen it. Then again, if I had set off, I know I would have had a change of mind and gone to Oare instead. Which, as it turns out would have been a good choice because Hen Harrier and Little Stint were in the area. I have yet to see any of the birds mentioned, or an Osprey, or a Merlin, or a Buff-breasted Sandpiper this year, and there have been plenty of sightings all over the place.

Peter Alfrey at Beddington doesn't even have to venture out of his house to get good views of some great birds. So far, he has seen both a Common Crane and a Short-eared Owl just by gazing out of his bedroom window - what he refers to as the Beddington Farmlands Observatory - at the right time. All I see from my house is a neighbour's dog barking its head off, or numerous local yobs walking with a swagger up and down the road as if they own the place. 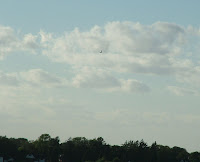 I went out late yesterday to Nore Hill in the vain hope of spotting a Ring Ouzel (I saw three there in the spring) but it was always going to be a tall order. I did see a Peregrine Falcon, two Buzzards and a Kestrel, though. Later still I went in search for the Corn Bunting that had been seen the previous afternoon by Kojak in the fields where the Grey Partridge were, but it was getting too dark. Coincidentally, in the gloom I spotted Kojak standing in the corner of a field. He was on the lookout for Barn Owl.

We had a chat about the Corn Bunting - he hadn't relocated it - and the Partridge situation, and the discussion going on at the moment as to whether these Grey Partridge - some reared, some perhaps breeding - count as a tick or not. I'm a bit like the bloke on the Fast Show, who ends up changing his mind each time someone has a different point of view. At first I was happy when Graham James suggested that they counted, then I changed my mind again when Johnny Allan left it open to question. But now, I back to thinking they count again. I can't agree with everybody, so I'm going to stick with the thumbs up.

So, Corn Bunting. Kojak was convinced there must be a few around what is a vast area with great potential Bunting habitat. It just needs someone to walk around this new territory for a few hours to try and spot them, but they are very rare in Surrey.

I'll probably give it a go at some point, but what it takes is time and patience, and I don't have enough of either. I know if I trawl around the local fields tomorrow morning I might end up seeing nothing, whereas if I go to Reculver and Oare, the chances are I will see at least one or two of the birds I'm searching for.

Then again, it is no doubt more rewarding to discover an unusual bird after a search that has taken hours, days and weeks based on a hunch and a bit of research, rather than just turning up, pointing the scope in the right general direction, ticking the bird off and leaving. Do you want to twitch or do you need more than that?

It's all about taking decisions that make you happy. I'm just not sure what decision is the right one for me yet.
Posted by Factor at 11:21