I took a chance and went to Reculver this morning, followed by Oare Marshes. It was misty, but the sun was doing its best to poke through. I was unsure as I started my walk what, if anything, I would discover. I parked at the Country Park car park and then headed south east behind the Oyster Farm towards the railway line and Chamber's Wall, then up to the sea wall and back to the car. 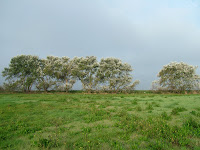 To cut a long story short, Oare was average (usual waders, plenty of Bearded Tit) while Reculver was reluctant to reveal many exciting birds. I got good close ups of four Goldcrests, I heard two Cetti's Warblers (I saw one of them), a Reed Bunting, a Stonechat, seven Oystercatcher, at least ten Little Egret and a couple of Redshank. I spoke to a couple of other birders (I think their names are Matt and Anne) who had also seen a Ring Ouzel near the railway line. 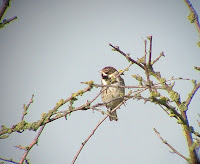 As I approached the end of the walk three Wheatears appeared on the sea wall near the rocks. I was resigned to having a good walk but no cigar, when one of the other birders (Matt) called out to me: "Excuse me! Short-eared Owl out at sea!"

I turned round and sure enough, circling like a Buzzard out at sea and coming towards us was a Short-eared Owl. What a bird - a magnificent sight. It looked like it was going to head inland but at the last minute it decided to head off over the sea again, pursued for a while by a couple of gulls. I was so entranced I only got one pathetic photo.

Never mind, the Short-eared Owl saved my day. I'll always be in its debt.
Posted by Factor at 17:55