THREE SHRIKES AND YOU'RE OUT... 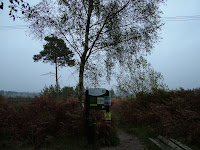 My life at the moment has layers of stress levels. On the one hand, I am so up to my neck in work I'm only getting about fours hours sleep a day. I have a magazine to get ready for print and all the deadlines have just about been missed due to late copy (happens the world over). On top of that, there are a number of advertorials to finish by tomorrow, a feature to write and a coffee table-sized diary which needs to be ready by the end of the week - and I haven't even looked at that yet.

So my birding activity has been stripped down to a minimum. Every second counts - a bit like speed chess. Actually, not like speed chess at all. For one thing, speed birding is not nearly so rewarding. In fact, birding on a tight schedule can be pretty pointless, but unfortunately I have no choice, apart from staying at home. The way the week has gone, that might have been a better idea.

It started to go wrong on Tuesday. A blue triangle, designating a scarce bird, popped up on the Rare Bird Alert map right over Surrey, at Thursley Common. What made the triangle even more enticing was that the bird in question was a Great Grey Shrike.

My record with Shrikes is lamentable. The only one I have seen (only!) was the Brown Shrike at Staines Moor last year. OK, so that was an exceptional bird, but I haven't seen any others. I missed out on both the Red-Backed Shrikes this spring at Banstead and Richmond Park, so I was keen to make up for those with this Great Grey.

The weather on Tuesday was glorious, but I only found out about the Shrike late on, so it would have been touch and go to get down to Thursley before the sun set. So I made the decision to go very early the following morning in time for sunrise. That way I could get back in good time to settle down to another full day's slog at work.

Bad move. The weather the next morning was like watching a black and white movie - no colour at all, a totally dull, grey morning. I went anyway, and needless to say, I saw nothing of the Shrike, not even a grey feather. I did see a Ring Ouzel, a Woodlark and a couple of Lesser Redpolls, but they didn't make up for the disappointment. I bumped into Penny Boyd who, with her husband (forgotten his name) discovered the bird the day before. It had been showing well. Bugger.

The next day I was too busy, and the Shrike was seen again in the afternoon. I went back first at light on Friday, which was an even greyer day than Wednesday. Again, I couldn't find it. As I was walking round I could feel the panic setting it as time was running out.

Another couple arrived just as I was leaving, and they told me the bird was probably to the south of Shrike Hill, and the Boyds were on the case. I would have gone with them, but I just couldn't give in to my indulgence. So annoying. If I had known beforehand, I only had to walk about another 200 yards and I would have come across it. My mood was as black as the sky. Just to rub it in, the bird was found where the couple said it would be, and plenty of other birders found it.

I was crestfallen, as I knew I had probably missed my chance. The dips in this hobby can knock the stuffing out of you at times, but that is my fault. I need to strike a balance and get things into perspective. I can't expect to go birding to see everything without some effort. 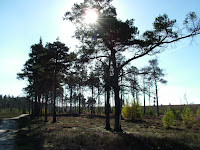 So, I had another go this morning, Beautiful blue skies, a crisp morning. Again, though, I drew a blank. I think this time it wasn't there anyway.

So there you have it, a week with too much work and not enough sleep, with no reward at the end of it. The problem now is my workload is to continue unabated for the next month at least, so I'll have to miss out on the Bluethroats, Pallas's Warblers, Hoopoes, Great Grey Shrikes, Rose-Coloured Starlings and all the other splendid sights happening out there in the south-east of Britain. Roll on next spring...