LAPPING UP THE LAPLAND BUNTING 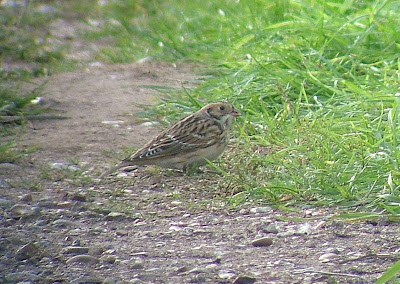 It was Monday when a Lapland Bunting was first spotted at the eastern end of Staines Reservoir. It had then been hanging out with some Linnets on both Tuesday and Wednesday - and was showing well.

I really like Lapland Buntings. I'm not sure what it is exactly, but they have personality. They're tough, too. Breeding in the Arctic tundra takes some doing, never mind spending a few days at Staines Reservoir, which is pretty bleak a place, even during the height of summer.

I was keen to see this one. I've already seen two this year at Beddington a few weeks ago, and although I got good views of them, I didn't get a great photo (journalistic license being used here) for posterity. Also, most sightings of Lap Bunts tend to be fly-overs, just brief silhouettes of a bird flashing across the sky. Hardly satisfying.

So knowing this one was on the deck and was discovered at one of my favourite haunts, I was champing at the bit to get up there. Trouble for me, of course, was work. I just couldn't ignore it. I was working solidly from home on Monday, in London all day Tuesday, out all day Wednesday... There didn't seem a hope in hell that it would stick around for my benefit on Thursday - but, much to my relief, it did.

I managed to get up to Staines for 3pm, and after a trek up the causeway - I decided to walk from the western end, just so I wasn't in danger of disturbing it for other people - I found three other birders watching it. It was sitting on the fence at the end of the north basin, before skipping over to the causeway itself, where it stayed for more than 40 minutes. Absolutey brilliant. It was certainly a hungry little chap, and seem to like the causeway for grub (perhaps someone left some seeds for it there). 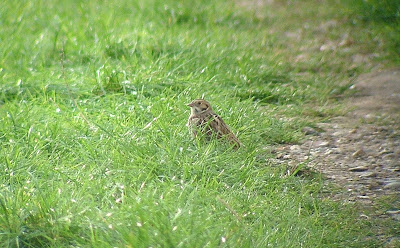 Eventually another birder, who reluctantly had to leave, had to walk past it to get to his car. It was reluctant to be flushed, but eventually it was, flying off back to the fence area.

That was OK, though. It had been an enjoyable hour's birding.
Posted by Factor at 20:37