It's been a testing few days. Apart from working flat out to get various magazines, awards programmes and Powerpoint displays ready for next week, the house I live and work in is falling apart around my feet.

In the space of a few days, the boiler has gone on the blink (the boiler thermostat doesn't kick in, so the hot water just keeps on heating up until it virtually boils over) and the telly has packed up. While we were having the boiler fixed, we also had a couple of radiator valves replaced. That meant draining the rads. No problem. We ran the pipe from the kitchen radiator outside when I discovered it was more than apparent that our drains out the back of the house were completely blocked. We were literally up shit creek.

The back of the house is now not a place to venture out into until I get a man out to unblock the mess. At least it happened on the approach to winter - if it had been the summer, it doesn't bear thinking about...

If all that wasn't enough, I got a text from both Johnny Allan and Kojak yesterday afternoon saying there were five Waxwings showing well in a suburban road near Epsom. I couldn't really take the time to go and have a look, but I off I went.

I saw nothing. These birds had flown from a favoured tree in the area (with a shopping trolley at its base as a landmark) to who-knows-where. Wherever their destination, they decided to stay there. I figured they might be back the next morning.

Next morning (today), and after giving Annie a lift to Purley to get a train to London (engineering works near Redhill), I had to get back home to wait for Dom the boiler and radiator man to arrive at 9am. In between times, I had another text from Johnny. This time there were 11 Waxwings at the same spot, this time seen by Devil Birder (aka David Campbell).

I was stuck, though. I couldn't get out of the house until Dom had finished, and that was going to take four hours, by which time Annie would be heading on her way back home. And I also had to tell her the good news about the drains. Oh, how she was going to laugh...

I couldn't resist it, though. The boiler man was staying until about midday, so I left him to it and popped up to Burgh Heath. As I parked up 20 minutes later, I could see a large throng of birders looking at the favourite tree. A quick glance revealed a flock of birds in it.

I got out of the car, grabbed my scope, looked up, and they were gone.

Having been in this particular tree for more than an hour and a half, the very moment I appeared (within a few seconds) they flew off. A Sparrowhawk arrived in the area at the same time I did, and that was the likely reason they took flight. I met up with Mark Stanley (he was the chap whose name escaped me from my previous post), who had been watching the Waxwings for more than an hour and no doubt got some great photos. I wasn't inclined to have a look.

If I had turned up even just a minute earlier I would had seen them in all their glory. I knew then that this was going to be one of those days...

Eventually, the throng evaporated, happily sated with wonderful views of Waxwings, and I was left on my own, staring at an empty tree. 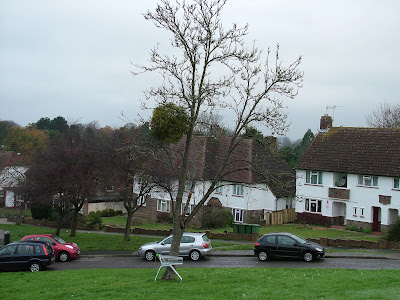 Predictably, they didn't return while I was there and I had to get back to pay the boiler man and also to pick up Annie from the station.

So, I went home again. I paid the boiler man, picked up Annie from the station, we had a laugh about the blocked drains and my dipping prowess and then had some lunch. In the afternoon, I managed to coax Annie that I really needed to go back to Burgh Heath. I drew another blank.

So that's three dips so far and I'll be back for more punishment tomorrow morning.
Posted by Factor at 09:22