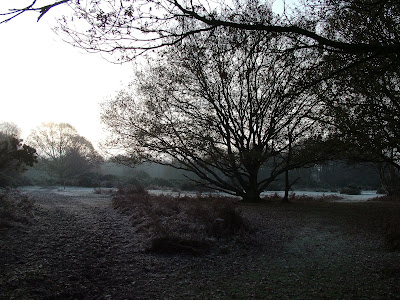 It has been a pretty grim week. Too much work and scant chance to get out of the house to get even the remotest glimpse of even a feather, let alone a whole bird. Having said that, I did manage to dip the Epsom Waxwings a further three times, to make a total of eight dips.

For this second innings, the worst miss was on Monday afternoon, when Johnny Allan sent a text to say the same 11 birds were in their favoured tree. I set off as soon as I got the message. He sent another text to say he was about to leave and they were still there. I arrived five minutes later - and they were gone...

I texted Johnny back to tell him the news and he actually rang back. He couldn't believe it. So much so, he is tempted to change my nickname from Factor to Dipper. I was gutted. Cut to the quick. I knew this just wasn't going to happen. And so it proved. I tried twice more before giving up. These 11 bloody birds had managed to break me. I was so cheesed off, it felt very personal. Why had these poxy (beautiful) birds done this? There was no rhyme or reason to it, really. They were oblivious to my needs. So that was that. The rest of the week was spent remorseful at not seeing these magnificent birds and staring stressfully at a computer screen.

The same day I missed the Waxwings by five minutes, I also got a text from Johnny and Kojak regarding a huge flock of Lesser Redpolls at Headley Heath, originally discovered by Steve Gale. They counted as many as 400 birds.

After dipping the Waxwings for the eighth and final time I went over to Headley this morning to check out the Redpoll flock. Amazing. Discovering a few Redpolls is good, but to watch more than 200 in the trees on a brutally cold morning (-3C) was a joy. 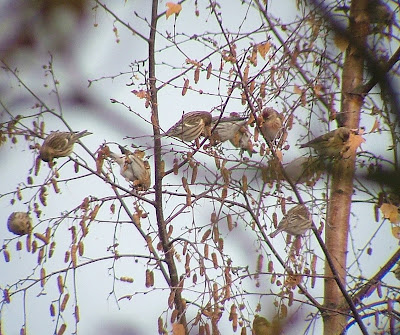 They were flighty. As soon as a dog walker or horse rider went by, they were off. I watched them through the scope for more than two hours, and eventually I found a couple of Mealy Redpolls (160).

The thing with scrolling through so many birds is, how can you really claim to have seen a Mealy Redpoll amongst so many Lesser Redpolls? The Mealy (from what I have read) is slightly bigger and paler. The two birds I saw were definitely bigger from the deeper hued and smaller Lesser Redpolls. But you'll just have to take my word for it.

If you have the time, go and have a look at this flock - it's a spectacular sight. I just wonder why they decided Headley Heath was the in place to have an early winter rave?
Posted by Factor at 14:49