SHRIKING WHILE THE IRON'S HOT 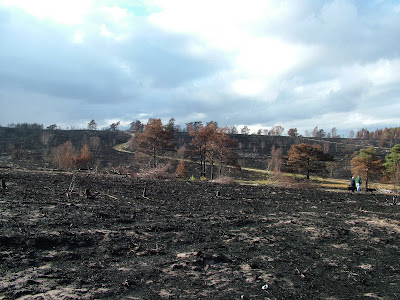 Everything is in a bit of a rush at the moment. Work is manic (16 hours days) so I have been glued to the computer all week. It's been relentless, but at least I escaped today. I didn't get out until gone 9.30am, but sleep got the better of me.

I've been lucky really. Nothing much has happened in Surrey for the past week, mostly due to south-westerly winds, which possibly have prevented such scarcities as Waxwings touching down in the county (apart from one bunch that landed near Guildford). Waxwings have been carpeting Britain in their thousands, but most of the action is occuring north of Watford. Maybe this week, with the winds changing direction, we might get a few popping in for a while in the local neighbourhood.

Perhaps the only interesting moment of the week was the twitching documentary on BBC. A brief glance at the birding forums gave a general impression of how the birding community perceived the value of this one-hour special - not too well, on the whole.

I don't know what anyone expected, really. Birding, as a pastime, is a bit eccentric, whether we like to admit it or not. And any fly-on-the-wall documentary hoping to lure a large captive audience is always going to focus on the extremes. It certainly did that alright, but rather than shaking my head in dismay, I thought the programme captured the essence of what twitching is about - basically, obsessional behaviour that can turn some people a bit bonkers.

Driving for more than 11 hours non-stop to get to John O'Groats, then boarding a boat to Orkney just to get a life tick is madness. And consider the families back at home who generally never see the twitcher for days on end, and who always come second-best to a hobby. Not good.

This morning I found myself migrating to a bird I wanted to see again. I ended up at Frensham Little Pond and Frensham Common, just because another Great Grey Shrike had taken up residence there.

The area is currently a surreal place to visit. The Common had a huge fire in July, which burnt a vast area south of Frensham Little Pond. The charred landscape will recover in time, but the vista looks like a nuclear device has been detonated over the area.

After trudging round for a bit, I noticed a group of birders on the ridge opposite Great Pond, looking down into the valley. They'd obviously sighted the Shrike.

It was some way off (as usual), so some of us walked over to get a closer look. Luckily it was perched in a dead Silver Birch tree some 200 yards away and then it flew straight towards us and landed in another tree just 50 yards ahead. Typically, we were facing into the sun and so moved round to get a better view. 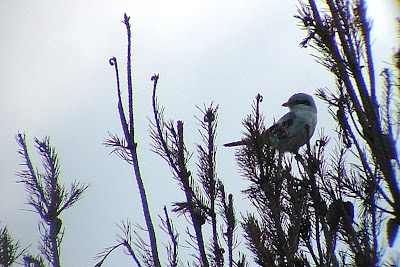 At this juncture, while the two guys I was with fired off frames from their cameras - one of whom, a wildlife photgrapher called Graham Carey, got a great shot which has been used on the Surrey Bird Club website - I was just setting up. The sun was behind us. Excellent. However, the other bloke with a camera got greedy and, rather than staying put to enjoy watching a brilliant bird, decided to get a bit closer - too close - and the inevitable happened. It flew off. Great. Thanks, mate.

So, for the next hour we ended up chasing the Shrike all round the Common and never got close to it again. In the end we lost track of it completely.

It had been a good outing, though. I hung around with Graham, and also met up with local patch guru Shaun Peters and Jan Wilczur, who is a bird illustrator - and had some top birding banter.

Next stop was Hindhead, for a brief visit. Nothing much there, apart from a Bullfinch feeding in a tree and some Goldcrests.

After that, I went home. Annie was off to London in the late afternoon, so at about 3pm I took a decision to go on a smash-and-grab mission to the London Wetland Centre at Barnes.

Earlier in the day, Jan had mentioned that Bearded Tit had been seen at the Centre first thing, so with that in mind, plus a chance to see a Bittern and a Jack Snipe, I set off for Barnes. I was contemplating taking a visit, via the Tube, on Tuesday as I am up in town for a meeting, but travelling by car, with hindsight, proved to be the better option. The AA route finder suggested it would take just under an hour to get there, but I arrived in 45 minutes (I didn't hang about).

The sun was hovering over the horizon but the light was fading fast. After paying the lady at the counter nearly a tenner to get in ("you do realise the Centre closes in an hour") I set off looking for the three potential Surrey year ticks. The problem for me was I didn't know where to go as this was my first visit. 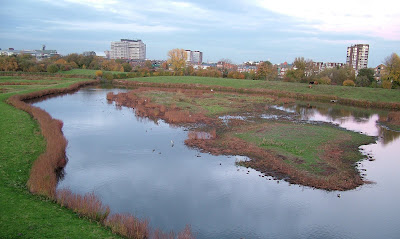 After an aimless ramble I asked a guy with a scope. He pointed me in the right direction but only after explaining that the Bearded Tits and the Bittern were both seen early in the morning and hadn't been seen since. Eventually I found myself in the Peacock Tower at the far end of the site, and after a bit of a scramble and the help from another birder, I saw my first Jack Snipe (156) bobbing up and down feeding on the scrape.

The Bittern will have to wait, as work will be flat out again next week and only subsides at the end of the month. 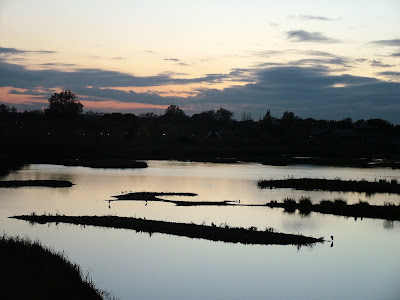