IN A HURRY FOR A HARRIER 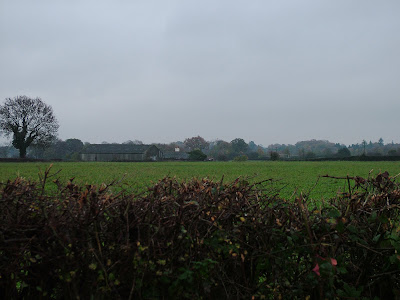 It was 4.45pm yesterday evening and I was in the Belfrey shopping centre in Redhill being dragged around the M&S womenswear department with Annie when a text came through from Johnny Allan. 'Male Hen Harrier Canons Farm. In field now. Thank you Devilbirder,' it said. It must have been very nearly dark, I thought. Is he still there? I texted back asking if it was worth going up to the Farm to have a look in the morning. He said it would, but to get there for first light as the bird was roosting there. He also said others would be there to see it, too.

Canons Farm birder David Campbell (aka Devilbirder) spotted the bird mid-afternoon and informed Johnny. He needed it for his Surrey list, and though my list pales into insignificance compared to the Surrey record holder, I needed it for mine, too.

The Farm is becoming a real jewel in the Surrey crown, and it's all down to David and the dedication he gives to his local patch. It just goes to prove that if you put the work in, you'll get your reward. He has had Corn Bunting and Black Redstart (almost a regular feature at the moment) recently and a Quail back in August.

I was due to have a meeting in London at 11.00am, so I made a point of getting up early this morning and was on the road heading for Banstead by 6.15am. The weather was cold and wet, but that didn't matter, so long as I didn't end up empty handed.

I arrived at the Farm about 20 minutes later, and after flaffing about for about ten minutes I walked over to where I thought the bird had been seen. I couldn't see anything in the gloom but I noticed two figures with binoculars about 50 yards away peering over a hedgerow. This was a stroke of luck for me. If I hadn't spotted Beddington birder Mike 'Posh' Spicer and fellow graphic designer Steve Gale I doubt I would have found the bird.

They had it in their sights at the far end of the field. I was struggling to see anything when suddenly the magnificent male Hen Harrier (157) took to the air. Fantastic. It circled the end of the field and looked like it was going to head towards us when it turned and then flew off low over into an adjacent field before flying off east.

OK, so we hadn't seen it for very long, but it was tremendous to see it in flight. There was no chance of getting a photo, it was still too dark. At 6.56am, when the Harrier left its roost, sunrise was still ten minutes away.

Having missed the bird by about five minutes the evening before, Posh left a happy man to go and get some breakfast, while Steve went on a walk to see what else was around before heading off to work, and I did the same.

I was hoping to find Brambling, as I've yet to see one this year, and Steve suggested I go to the field where the Harrier flew into, before it headed off out of sight, because a couple were seen with a flock of Chaffinches yesterday. I found a flock of about 50 Chaffs feeding in the field, but couldn't distinguish any Brambling amongst them. 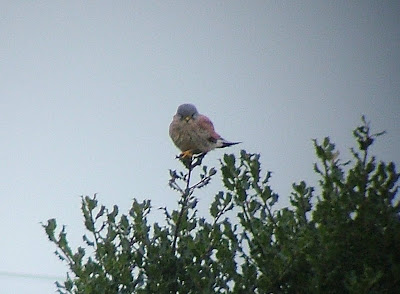 It was more a morning for birds of prey, with four Buzzards and a Kestrel on view. I also came across a few Siskins and Yellowhammers. I'll be back at some point soon to have another search for Brambling and perhaps even the elusive Corn Bunting.

Before heading back home, I texted Johnny to thank him for his help. He texted back. 'Nice one. He who dares...ticks.'
Posted by Factor at 15:11