SPEED AWARENESS - THEN OFF RODING

Back in February I got caught out by a mobile speed camera in Gwent doing 38 in a 30. It was the first time in 10 years that I've slipped up - bloody annoying, but it happens.

Nowadays, rather than taking the three points, £60 fine and the inevitable rise in your insurance premium, you can take the option of going on a Speed Awareness Course. I chose to go on the course, which cost me £95.

I was expecting the visit to the Holiday Inn in Guildford yesterday to be an endurance where you lose four hours of your life being patronised about the dangers of driving eight miles an hour over the limit.

As it turned out - and I think most of the 27 who attended our group (there were a further 30 attending in another lecture room) would have agreed - that wasn't the case. In actual fact, the course was really informative. There was plenty of good humour amongst the serious stuff and I came away better for having taken part... well, at least until I got back into the car and was heading towards Elstead on the A3, that is.

I planned an evening of birding around the awareness lecture - which was from 5pm to 9pm - so as to have something to look forward to during the day. Earlier, I made a quick visit to Cutt Mill Ponds, in the hope of seeing Spotted Flycatcher and Marsh Tit - but I came away seeing neither. I did see three Common Terns feeding on the main lake, plus a Mandarin Duck, plenty of Nuthatches and Treecreepers, and a Grey Wagtail. What didn't help was timing my visit just as a huge cloud dumped gallons of rain on the area, so I spent most of the 45 minutes at the Ponds standing under a tree.

Not to worry. Later, after the course, I headed for Thundry Meadows as the sun set. I've never been to the site before, but it looked like it had the potential to be a good place to go. I had one bird in mind to see, Woodcock (146), and I ended up seeing at least four.

I say at least four - I may have seen more than that - because these 'roding' males were all performing the same idiosyncratic display flight above the top of the trees where they follow a circuit of the woods calling out with a marked high-pitched ‘tsiwick’ call, so they could have included the same ones on another flying lap. One flew right over my head at one point, while another two flew together, right across my path. A fascinating visit, at any rate. 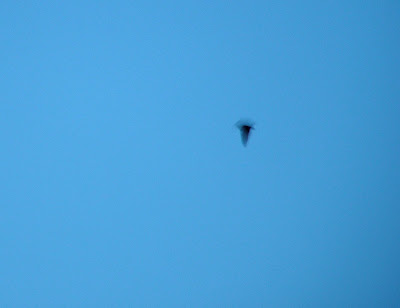 As it was getting darker, I headed back to the car and made the short trip up the road to Crooksbury Common. I'd read on Bird Forum, that the Common was particularly good good for Nightjar, and so it proved. 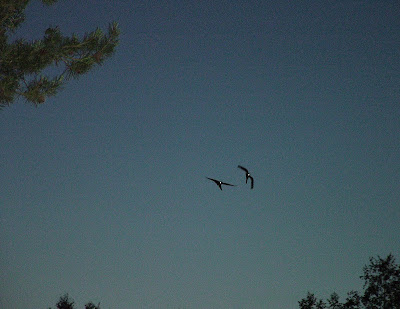 It's a compact place, so you don't have to walk far before you come across them. What a majestic sight, too. On a perfect, cloudless, still night, I had fantastic views of at least four Nightjars, all calling out as they flew around me - at one point within three feet of my head - gliding through the pines, before settling down on a branch to churr away to their hearts content.

If you haven't been, I really do recommend a visit one evening.