I had a handful of opportunities to search for new sightings this past week. I was given info from Devil Birder (David Campbell) about a pair of Firecrests in Effingham Forest, so using his OS co-ordinates I made my way there on Friday afternoon. It was more of a recce than a proper search, as I only had about 45 minutes to spare once I got there.

I parked up at Mountain Wood, near to Sheepleas, and set off up the hill through the pines. As it turned out I didn't quite go to the right part of the woods. I was only about 200 yards away from where I should've been but it was enough not to see the 'crests. What I did see, at long last, were a couple of striking Marsh Tit (147), calling out with their very distinctive pitchoo call (excuse the very moderate record photo below). 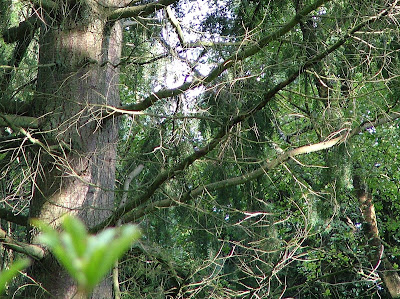 On Sunday, I made the mistake of going to bed too late after a long day, getting up the next morning later than planned and then setting off just as it was starting to rain. Not exactly what you would hope for in June - freezing cold, blowing a gale and incessant rain - but I ignored that and went ahead anyway. A Quail had been seen in a barley field at Dockenfield - near Frensham Ponds - by Johnny Allan on Wednesday and then by Mark Spicer the following day, so I couldn't resist going for a look. Johnny had got a glimpse of the bird, and seeing as he reported that the barley wasn't too long, I had a good feeling that I might get a first actual sighting, rather than just hearing it with it's 'wet my lips' call (as a side issue - does it really sound like wet my lips? If I hadn't known that was what it allegedly sounds like, I don't think I would've guess it).

I arrived at 8.45am and almost immediately I heard the Quail calling. As I walked up the bridlepath, it was clearly really close by - no more than about five feet away - but could I see it? Could I heck. The call got quieter as it moved further into the field and eventually it stopped, and didn't start up again for another 90 minutes, by which time I was cheesed off and wet enough to give up the quest.

I then popped over to Frensham Little Pond, in the hope of finding a Spotted Flycatcher - apparently one of the best places to look for one. I found three Common Terns feeding on the lake, plus a couple of Redstarts but no Flycatcher. So that was it for Sunday. Then this morning I got up at the crack of dawn for another go at spotting a Flycatcher. I tried Thundry Meadows on the way to Frensham - nothing doing there, and then as the sun burnt off the early morning mist, I tried the Little Pond, but again, just a couple of sleepy Common Terns and a fledgling Redstart were all I could muster. So, my final stop was at Effingham Forest for another go at finding the pair of Firecrests. The attempt wasn't helped by the din from the logging that was going on nearby. A Firecrest isn't easy to hear when it's quiet, let alone when there's trees being felled and constant engine noise in the background. I briefly thought I could hear them, but looking up into the trees I just couldn't see any sign. Needless to say, I drew another blank, and as today has been chosen as a day for decorating the spare bedroom (I was so looking forward to it), I ran out of time. Not a good morning.