THE DARTFORD WARBLER FIGHTS BACK AT CHOBHAM COMMON

A few weeks ago I found a male Dartford Warbler at Chobham Common, just 300 yards south east of the Longcross car park, using OS co-ordinates given to me by top Tice's Meadow birder, Rich Sergeant. These delicate little birds are difficult to find at the best of times, let alone when two of the severest winters on record in 2009-10 and 2010-11 pretty much wiped out huge swathes of the Dartford Warbler population.

But it was a heartening sight to see this male. It proved that while the bitter cold will have dire consequences, a few can battle through it and survive.

While finding the bird was satisfying, having had a couple of fruitless searches previously at Chobham, the moment was only fleeting - a dog walker appeared just as I was about to take a record photo and it flew off.

I've been to the same spot a couple of times since and seen nothing. I was starting to doubt whether I was looking in the right place. Then yesterday I bought the June issue of Birdwatching magazine, which included an article on Dartford Warblers by Dominic Couzens. One of the topics of the feature was a theory on how to find one in the field. The theory goes that where you find Stonechats on heathland, there's a good chance - if there is one in the area - that you'll also find a Dartford Warbler.

It's not a sure thing, but it's their respective methods for searching for food that brings them together. The Stonechat will perch high and swoop down and pounce on insects, while the Dartford Warbler will rummage around low down in the heather and gorse for food. It's no surprise then that if a Dartford Warbler is present, an opportunistic Stonechat will wait for the Warbler to flush insects out of the undergrowth for it to grab.

So I thought back and remembered seeing a pair of Stonechats in the same area where the Warbler was, so I went back to the same spot again late this morning. The theory would have been a good one, apart from the fact I didn't see a single Stonechat.

I watched a pair of Woodlark with their fledgling young, which was a nice sight - but best of all, and without having to look very hard, I homed in on a male Dartford Warbler. 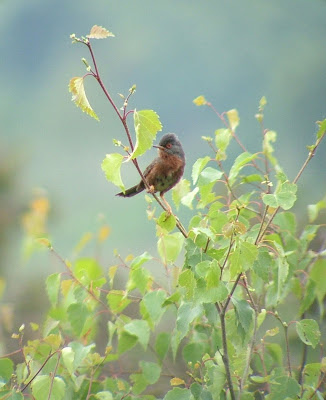 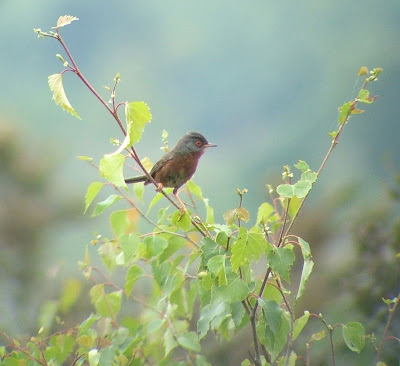 It was almost certainly the same bird I'd seen on that previous visit, and this morning he was very actively searching for food, returning to his nest nearby with a full beak. I managed to get great views of the fantastic little warbler as he called out with his distinctive nasal thchirr.

One of the Surrey Wildlife Trust wardens was showing a group around the area and he stopped for a brief chat, and having told him of this sighting, he mentioned that at least another three more had been seen in the Albury Bottom area. It's good to know that the Dartford Warbler is fighting back.
Posted by Factor at 22:49