The Short-eared Owl is probably the bird of the moment. As has been said many times before, it looks like a particularly good year for them. Down at Papercourt Meadows near Woking, two Short-eared Owls have been seen regularly for the past couple of weeks. With luck they may stick round for a while. The habitat at Papercourt is ideal for them.

I've paid a couple of visits during the past week. Last Sunday's trip was a bit of a disappointment. Leaving the house in bright sunshine, I was hopeful I'd get some good late afternoon views, but ten miles down the road past the Leatherhead junction of the M25, the weather changed dramatically. A thick fog descended - it was a real pea-souper. By the time I'd arrived at Papercourt, visibility was down to 50 yards. I did see a Short-eared Owl appear out of the gloom - it landed on a fence post before setting off across the Meadows but I couldn't get my camera to focus on to the bird because it was too misty.

I opted to visit the area again this afternoon. I have been tempted to try and find a Firecrest that has been seen regularly at Mercer's Lake car park during the past few days - just a mile up the road - and failing a sighting there a trip to Banstead Golf Course, where David Campbell had recently relocated a regular Firecrest visitor. But I don't have a good relationship with Firecrests. My success rate this year has been nil - and I've tried umpteen times to see one. I'm not sure why it is, but part of me thinks it's to do with my hearing, which after many years of being subjected to very loud motorsport, has probably suffered irreparable damage and so I probably can't detect high-pitched sounds - like those made by a Firecrest. They are also extremely fidgety little birds, so getting a nice view of one is hard work.

So, wanting a relaxing late afternoon after a very busy week, I decided Firecrests can wait. Down at Papercourt there were, thankfully, few people about apart from a number of birders and a couple of horse riders. While I waited I saw a Kestrel and a pair of Stonechats. By 3.30pm the first Short-eared Owl appeared. A bit distant but it quartered the usual area to the north-west of Papercourt Lock for a good 15 minutes. At one point it was hassled by a crow before it managed to shake it off to continue its hunt. 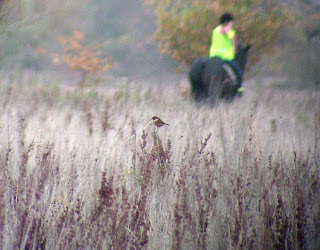 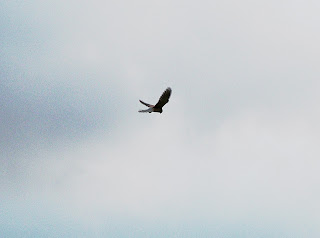 Eventually, it flew off heading north west. About 20 minutes later a second one appeared from the east and carried on where the first had left off. By this stage the Barn Owl was going through its evening routine. There had earlier been a couple of large birds in the distance being mobbed by crows, one might have been the Barn Owl, but it was getting dark and hard to make out what they were. 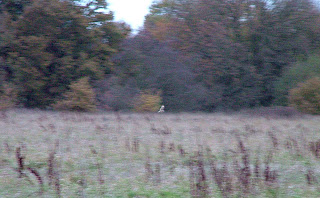 On the Surrey Birders website Steve Chastell posted he had seen three Short-eared Owls at Papercourt this evening and possibly a fourth. Here's hoping so.