With only a couple of months left of the year there are a few birds I would like for my Surrey list before December 31.

Some will be more difficult than others.

The way things have been going recently I doubt I'll see any of these. For four consecutive trips I have failed to hear, let alone see, the diminutive, fidgety Yellow-browed Warbler at Newdigate. I have spent hours staring at a tree that could have been totally devoid of bird life. Who could tell? I'm convinced it's a big scam just to wind me up - it doesn't really exist.

Well, for me it doesn't, so I'm in dilemma worthy of Schrödinger's cat, or in this case Schrödinger's Yellow-browed Warbler. This thought experiment, originally designed by Erwin Schrödinger in 1935, explains the true nature and behaviour of birds this small.

Imagine the scene. The Yellow-browed Warbler has been glued to a branch in an oak tree with a taser gun on a timing mechanism pointed at it. This taser is set to go off at some point in an attempt to make it sing. We can't see any of this.

Schrödinger stipulates that the Yellow-browed Warbler is both dead and alive. This is called a superposition of states or observer's paradox. We can only know if the warbler has been frazzled or not once it's observed. And there's fat chance of me doing that.

The same problem is haunting me at Thursley Common with the Hen Harrier that has been roosting there - except for those evenings when I turn up. It has been seen at various times of the day, and I've been to Thursley in the mornings, afternoons and evenings. I've seen nothing.

I've basically given up on both of these. The Harrier is the one that hurts a bit though, because I so enjoy watching Harriers. I'll just have to make another trip down to Burpham and get my kicks that way. I'll hopefully see a few Short-eared Owls, too.

All the above angst is the result of Surrey listing. A totally pointless exercise, but once you start, it is hard to stop. You get so far into it during the year, you might as well carry on for another eight weeks. After that the commitment will be over and you can pretend you won't do it all again the next year.

I'm pretty certain listing is the main culprit for make birding uncool. It is the obsession with lists that drives people to congregate down a country lane and stare into a hedge 20-deep as the photo below, taken by Tom McKinney on the Isles of Scilly for the Scarlet Tanager, illustrates. 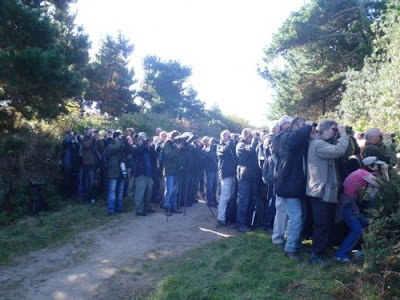 Doesn't look great, does it? Hardly makes for an enjoyable day out. But I know, if I ever find my way on to these tiny islands at some point in the future, I could end up in the middle of the ruck.

I hope not, because if I'm completely honest, I prefer birding in solitude. The whole point for me is to escape from the trap of staring at a computer screen all day trying to make a living. I like twitching when most people have gone - I want to avoid the manic behaviour of the throng. A bit of calm will do me fine.
Posted by Factor at 18:44