A SURREY SHORT-EARED OWL - AT LAST

As you may have gathered from previous posts this majestic bird has become a quest of Holy Grail proportions for me. I've lost count of the hours I've spent waiting, or rather hoping, to see a Short-eared Owl this past week.

It appears to be a good year for them. Short-eared Owls have been seen all over the south-east, particularly on the Sussex and Kent coasts, and also inland in many areas of Surrey. Beddington, Holmethorpe, Canons Farm, Thursley Common, Papercourt Meadows, Staines Reservoir. These and more have had Short-eared Owl sightings during the past few weeks. Yet, I hadn't seen one at all. I tried Canons Farm a few times, but apart from a nice photo of the sun going down, I only saw a couple of Little Owls. 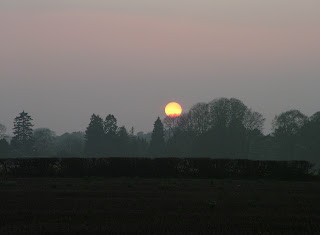 On a number of visits to Thursley Common I had no luck (I was hoping more for Hen Harriers there, but came away empty handed). Then on Sunday, I noted on the Surrey Birders website that a friend of mine, and former Racing Post colleague, Francis Kelly, had seen two at Papercourt Meadows. Then the following day, another was seen at the same place.

I contacted Francis for more info, and he agreed to meet up on Wednesday late in the afternoon. He took me to a spot at the Meadows north of the River Wey, where there was plenty of good habitat. He also showed me the resident Barn Owl nesting box high up in a tree – a mass of pellets at the base of the tree trunk was a tell-tale sign of Barn Owl activity.

As it turned out, we didn't see a Short-eared, but the Barn Owl stood out as the light faded, quartering over the fields just north of Papercourt Lock. A number of Little Owls began calling each other across the flood plain. We also saw some incredibly large toadstools. Don't know what they were though. 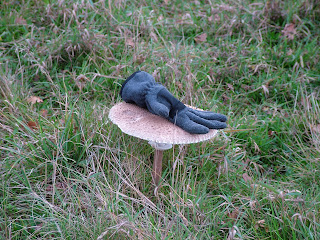 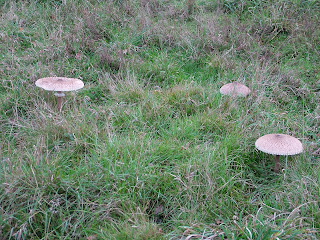 So, still no Short-eared. The next day, Tice's Meadow birder and new Surrey Bird Club Field Meetings Officer, Kevin Duncan, also saw one at Papercourt. It was becoming a bit of an issue. The only shred of good news I could garner out of all this was that, if I went enough times, it was likely I would find one at some point. At least I wasn't the only only having little good fortune. Rich Sergeant, one of the Tice's Meadow crew, had also drawn a blank a few times.

So it was I went back to Papercourt late this afternoon. I went along the same route as Wednesday. It was getting late and I'd seen nothing. Rich sent a text - he was also at Papercourt. He was on the south side of the river, while I was on the north. There was little activity as the light faded. It wasn't looking promising.

But then he rang to to say he'd fleetingly just seen one near the pylons that run down the middle of the Meadows. It was heading my way - apparently - but I could see bugger all. To my left I could see the Barn Owl - quartering the same field as it had two days earlier. He rang back to say the owl was sitting on a fence post close to some cows, the herd of which I could see, but the bushes and trees by the riverbank obscured any view I had.

As I scurried across to the river bank, Rich shouted over and pointed to the edge of the field. And, at last, there it was. A Short-eared Owl (166) was hunting in the field. It ghosted up and down the edge of the field before turning and heading north. I lost sight of it as Rich left to beat the traffic, but I managed to relocate it a short while later.

By this time it was getting very dark, so I had to set off back to the car. On my walk back I thought I saw another Short-eared Owl fly overhead, but couldn't be certain, but I did see a Tawny Owl (167) and heard a number of Little Owls again.

Papercourt is a remarkable site for owls. I can't recommend it highly enough. Four different species in one afternoon is a good haul anywhere, let alone Surrey. I'll be back to try and get some better views, perhaps at first light at some point this weekend.