THE RAINHAM MARSH WARBLER – THE MASTER OF MIMICRY

I had to get back to Rainham Marshes yesterday if I was going to have any hope of seeing the Marsh Warbler. The weather forecast for the next few days is truly terrible – heavy rain and strong winds, so the Marsh Warbler was likely to keep its head down for a while. Isn't this supposed to be June, for goodness sake?

I don't think many birds could be harder to see than this one – the two words 'although elusive' are a bit of an understatement. It has taken three attempts and more than nine hours but at least I managed to see the Marsh Warbler yesterday evening, and compared to most people I'd say I saw it pretty well.

With each visit I made progress. From hearing it singing constantly on Saturday but not showing, to the slightest of views – literally less than half a second, really just a slight movement in the bushes – on Monday night, to decent views on Wednesday evening.

After Saturday's marathon, I dropped in on Monday evening for an hour after working at Racing Post. It was a still and sunny evening – I heard the Warbler go through its repertoire and got a glimpse that was so brief I couldn't say I knew it was a bird apart from the fact it sang in the same place moments later but out of sight.

The only other bird of note during that time was a Hobby perched on the fencing next to Coldharbour Lane.

So after a busy day yesterday I managed to slip out at 4.30pm and trawled around the M25 to the Serin Mound in just over an hour. Not bad for rush-hour traffic. There was only one other birder there, Tim – a guy I know from watching the Hawfinches at Bookham Common. He had come over from Hammersmith by train – he doesn't drive, so he has to do the leg work.

Tim had heard the Warbler soon after arriving, just 15 minutes before me and it wasn't long before it started up again. The weather was closing in and after watching a Marsh Harrier hunting out on the marshes, suddenly it started to chuck it down.

Pretty typical really. It was sunny to the north and dark as death to the south. It was hard to imagine it would clear, but after 15 minutes or so, it did. And the sun came out. This meteorological event seemed to have a positive effect on the local birdlife.

A Grasshopper Warbler started reeling to our right. Tim went off to investigate while I stood, eyes peeled, watching the hemlock for some movement. He came back for his camera as he'd found it and so I went for a look, too. There are some gorse bushes by the side of the footpath just 50 yards from the Serin Mound and that was where the Gropper was favouring to perch.

It was surprisingly mobile, flying low across the reeds and into another bush to start reeling again before flying back to its favourite spot, just ten feet away from us.

This was a great find, and was added to moments later by a Short-eared Owl out on the marshes. There are apparently two Short-eareds here and with the area home to the UK's largest concentration of Water Voles, there is plenty of food for the owls to feed on. 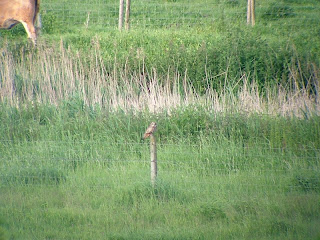 So, even without the Marsh Warbler, it had been a good evening already. We listened out for the Warbler and then I saw it perch up on a stem of a tall hemlock plant. After two seconds it dropped down lower. So from nothing, to a tenth of a second to two seconds. This was getting good!

The mimicry of this bird was remarkable. It copied a Swallow, followed by a House Sparrow and then a Blackbird, plus a number of other birds I didn't recognise. The accuracy of the song was uncanny and may be part of the reason it is so hard to spot apart from the obvious geographical and botanical constraints.

The Blackbird impersonation, in particular, was so authentic I had originally ignored it as the real thing but when Wren, Skylark, House Sparrow and Swallow song all appeared in the exact same place, you knew it was the Marsh Warbler.

Dave Smith, who is a volunteer at the Reserve and a train driver – had been up to record the bird at 1.30am a few nights ago after his shift. At the latest count there have been 21 different species of bird song coming from this master of mimicry. Amazing.


Eventually I saw it low down on a stem of a dead hemlock, and Tim and I watched it as it sang happily for a good five minutes (yes, I watched it for that long), preening itself occasionally. It had a distinctive white neck and orangey underparts. It was only just visible through the weeds and undergrowth, and the camera just wouldn't focus on it. I couldn't use the scope either because it was just a few inches too low for me to see anything through it, so I had to make do with watching it through my bins. If I had been a couple of inches shorter I would have seen nothing.

But after all the effort I was very happy with that. An excellent evening.
Posted by Factor at 02:16