We are in the grips of June, the barren month of the year when spring migration is a distant memory and the hope of a rare visitor popping up only happens hundreds of miles away on the coast where we don't live anywhere near to. Birds that have bred in Britain are now feverishly feeding their young, who are themselves instinctively preparing to fledge and start their journey south to the warmer climate (it couldn't get much colder where they were born if it tried).

On that subject, the jet stream has a lot to answer for. For at least the past three years it has done its best to screw up our summer and the way things are progressing this year's summer finished at the end of May when we had almost two weeks (wow!) of hot, balmy days.

I focus much of my birding in Surrey, but because it is June and I've giving up Surrey year listing for this year, it has given me a broader range to search for some really interesting birds that are less than an hour away by car.

Last week's Marsh Warbler was an enjoyable twitch in the long run, no matter how long it took to actually see the bird and my quest for great birds continued last Saturday with a brief visit to Arlington Reservoir in East Sussex in the hope of seeing an Osprey.

Ospreys are birds I grew up thinking I would be very lucky ever to see. I remember when I was young reading a feature on Ospreys at Loch Garten in Scotland and a striking photo on the opening spread of a newspaper supplement of a lone tree that looked as if it was in the middle of a war zone.

My recollection was of a lone pine tree surrounded by not much apart from barbed wire wrapped around the trunk. It was part of Operation Osprey, a mission to resurrect the Osprey population from zero birds breeding to just a handful. A pair began breeding successfully in 1959 for the first time since 1916 at Loch Garten and this pair were watched round the clock to protect them from egg collectors hell-bent on stealing the eggs (I really don't get that - why would they want to wreck the chance of these magnificent birds from successfully breeding in Britain? Unimaginably selfish).

The long and the short of it is they bred successfully, and now there are around 250-300 pairs breeding in Britain. Amazing.

We don't know where many of them are, or if we do, we're not telling because we don't want the egg thieves getting their way.

What we do know is that a few Ospreys spend the summer in south-east England – they have been seen at Weir Wood Reservoir and particularly at Arlington Reservoir, where two have been seen regularly.

It's only 50 minutes away but I've never been to there before. It was a warmish afternoon but very breezy – the water on the reservoir was a bit choppy. There was nothing much about when I first arrived apart from a few Great Crested Grebes, an assortment of gulls and Mallards.

The after about 30 minutes a large raptor flew slowly into the wind across the reservoir from the north. It was an Osprey. Fantastic. 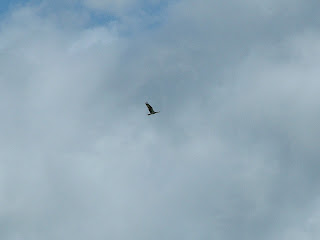 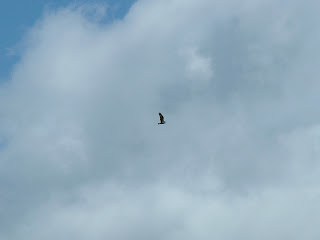 Ospreys enjoy fishing at Arlington, presumably because there is plenty of trout to feed on. This one drifted over the water about 200 metres way from me and carried on over to the south end of the reservoir before making its way back over the water and eventually out of sight.

Bloody brilliant, though. It is still hard to accept that Ospreys hang out in the south-east all summer, but clearly they do and if you go to Arlington, at some point during the day you will see one.
Posted by Factor at 03:03