A LITTLE SEAWATCH HERE, A LITTLE BITTERN THERE

I had a day off on Saturday. I mean a proper day off which meant I could focus on birding for quite a few hours.

I know it's June, but I wasn't going to refuse a gift horse. The winds were expected to be high and being June, when there's not much activity inland, a seawatch was the order of the day. The last time I had a seawatch was more than a year ago and, to be honest, it wasn't one of my favourite birding experiences. I was at Oare Marshes and the winds and rain just battered me into submission. I saw a few decent birds through watering eyes and a shaky scope but it was bloody hard work.

This time around I was more up for the job. I opted to go to Selsey Bill. I'd not been there before so looking at the map I headed for Grafton Road. I didn't know what I would find once I got there but fortunately I was in luck.

The end of Grafton Road is a dead-end where you can park and look straight out to sea. On the right-hand side is a wall that acts perfectly as a windbreak and below it is a park bench – where two birders were sat.

This was obviously the right place.

I set up my stuff behind the pair sitting down at about 8.00am and introduced myself and round turned Staines Reservoir birding buddy Bob Warden. Bob had had the same idea as me. The combination of high winds and nothing much happening back home meant Selsey Bill was a good choice.

The sea was very rough and the winds were gale force six or seven. We were hoping for a Storm Petrel or two, but as the morning progressed none appeared. There were plenty of Gannets flying up wind, plus many Common Terns and the occasional Little Tern fighting its way into the headwind trying to feed. Another bird of note was an Eider bobbing about on the water, not far offshore.

After about an hour someone joined us on the bench – it was top British and south-east England birder Owen Mitchell. For a novice birder, let alone a novice sea watcher, having Owen sitting next to you is a blessing. Owen soon had me locked on to a couple of distant Manx Shearwater scything across the horizon – for me a great find and one I wouldn't have spotted without his help. He also noted many Common Swifts heading out to sea, clearly heading back the way they had arrived earlier than usual (it confirms the weather this summer so far really has been that bad) and a couple of Fulmars.

Owen only stayed for about an hour as he had to open the visitor's centre at the Pagham Harbour RSPB reserve, but he recommended I come back in the autumn if I wanted to see some decent sea birds at this same spot.

Earlier in the week I had been tempted to travel to Rickmansworth to see a female Little Bittern that had been found and showing well on the River Colne by Stocker's Lake before it flew downstream. I couldn't really spare the time, and in the end I didn't go. There had been no sign of it the following morning. That was Thursday and there had been no sign since.

While we were watching a relatively empty sea I scanned the Rare Bird Alert website on my mobile for the latest news just before 9.00am. The Little Bittern had been rediscovered at Stocker's Lake. I gave Bob the news. He groaned. He would have normally been at Staines Reservoir in the morning and therefore only 20 minutes away from Rickmansworth. I knew how he felt. It had obviously still been around but hard to find. It was now showing well all throughout the morning.

After three hours staring at the sea it was a good time to head off to twitch the Little Bittern. On the way I went to Church Norton to see the Sandwich Terns and Little Terns that nest there. It is a really good spot and a definite site for me to return to in the autumn, as many migrants drop in here.

I then took a left turn and headed to Farlington Marshes in the hope of seeing the Glossy Ibis. In the end I had to abort the idea. It was now midday, I had struggled to find the right place to park, and when I did the wind was so strong and the walk was quite long I lost the will to make the effort!

A Glossy Ibis is a rare bird but more are likely to appear in the south-east than a Little Bittern so the Rickmansworth bird took priority.

I parked up at the Rickmansworth Aquadrome Nature Reserve at 2.30pm and made the walk, via the Yacht Club, to the river. On the way a Red Kite drifted west just north of the river. There were plenty of birders on the footpath peering across to the opposite side of the river through their bins and scopes. The first person I spotted was Tim Dackus. I manage to bump into Tim quite a lot. Just a couple of weeks ago we spent an enjoyable evening watching the Marsh Warbler at Rainham.

Tim pointed me in the right direction me and it wasn't long before I was looking at my first Little Bittern. As the name suggests this heron is very small, about a third of the size of a Greater Bittern, and when in amongst the reeds is easy to miss – especially so if it sits lock-stock still, as it was prone to do, waiting to grab an insect to eat. It is rumoured that this rare migrant has been on the River Colne for at least a week, having been seen by people fishing on and off during that time, and maybe even a month. Being so hard to see at times that could well be the case.

It was also easy to miss because a couple of birders decided to stand on a small jetty right in front of the rest of us and therefore blocking the view. Being a typically English gathering, everyone was too polite to say anything, but as the bird moved out into the open I had to ask them to at least squat down so the rest of us could have a look.

I love photography, and especially fantastic photos of birds, but it shouldn't be at the expense of other people's enjoyment. A similar thing happened at Rainham. Rather than standing at a discreet distance to watch what was admittedly a very difficult bird to see through the undergrowth, a number of birders had clearly walked into the vegetation to get a better view. In the end, the reserve warden chose to put up some plastic fencing to act as a deterrent.

Back at the River Colne, after about 45 minutes the Little Bittern became less camera-shy and appeared out in front of the reeds and for the next five minutes or so showed really well as it homed in on insects and the occasional fish. 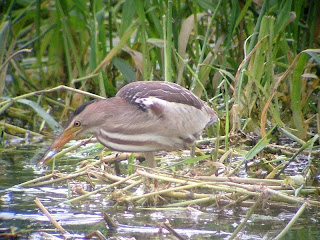 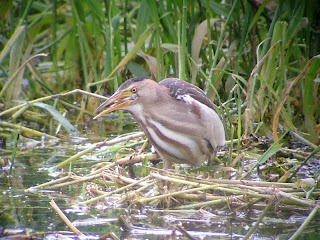 Little Bitterns breed in Africa, central and southern Europe as well as in southern and western parts of Asia and is very rare to see in northern Europe – it was certainly a rare treat in Rickmansworth. 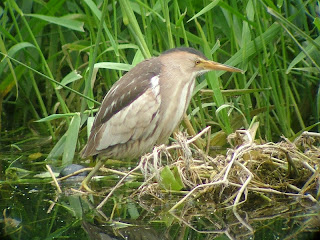 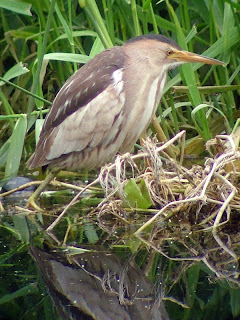 It then returned to the cover of the reedbed and so it was a good time to head back home. I gave Tim a lift via Staines Reservoir, where it was blowing a gale. Not much there apart from more than 1,000 Common Swift and a few Swallows, House Martins and Common Terns.