A TWITCH TOO FAR?

And to the Moon they went seven years later. Amazing when you think about that. Three men headed for the Moon and two landed on it – in a tin can compared with what we can build now.

But I digress wildly.

The reason I thought of that quote was because it reminded me of difficult twitches. Yep, we do them because sometimes they are hard, but they are a challenge worth accepting -– or so you think at the time – so long as they are successful.

One such challenge occurred on Saturday at Rainham Marshes. A Marsh Warbler had been found on Friday morning, close to the path near the Wennington Mound/Serin Mound. The Wennington or Serin Mound is at the furthest end of the marshes – a good 25-minute walk from the Rainham Marshes Nature Reserve car park – and within five minutes of a car park at Aveley Bay.

If I had known there was a car park at Aveley Bay I would have parked there. But no-one tells you there is car park within a five-minute walk of the viewing point. When directions are given on the Internet people assume you know but I don't have any knowledge of the area, so I need all the help I can get.

So, after 25 minutes I set up shop. The next six hours really tested my resolve. I arrived at the Reserve at 9.15am, and returned back to the car park at 4.30pm. During that time I stood in basically the same place and heard the varied and fluid song of this Marsh Warbler at least ten times, but during that whole period of my life I didn't see it once – not even the slightest movement in the undergrowth.

If someone insisted you to stand in the same place staring at weeds for six hours, the first reaction would be to tell them to bog off. You'd do it for a bet, or if you were insane. Staring at the same area of weeds for that amount of time would be staggeringly boring.

But I can honestly say the time flew by. I can't say I was having fun exactly, but I was motivated by hope. Delusional with hindsight, but hope it was. At some point I would actually see this flipping bird.

The short version of this story is I failed. But there was little I could do about it. Some people got brief glimpses, but it was luck more than judgement. And I was so close to this Warbler, too. I felt I could almost walk up to it and touch it. The song was so clear but the increasing wind and dull weather forced it to stay low. The sun did come out late on, but it still refused to show itself. It did, obviously, two hours after I left, but there is only so long one can grind out these sort of twitches.


I hung on longer than most. Many of London's leading birders were present, including Dominic Mitchell, David Campbell, Ian Jones and Hawky, but they all knew it was going to be a long and fruitless day so they left by lunchtime. I should have gone too, but once you've made the sacrifice, it is hard to cry enough. Having invested so much time already, the thought of leaving just before it bloody shows is enough to root you to the spot.

But leave empty-handed I did. I did see the following:

One Corn Bunting
One Cuckoo
One Hobby
One Marsh Harrier
One Peregrine
One Reed Warbler
Many Reed Bunting
Many Shelduck
Not much else of note.

On a happy note the Common Scoter stayed for an extra day on Wednesday at Water Colour Lagoons at Holmethorpe and I got nice digiscope photos of it. 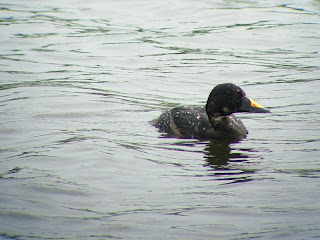 Have a good week. It's the Queen's Jubilee weekend, apparently. Unfortunately, some of us have to work.
Posted by Factor at 03:24