Listing. What a poisoned chalice that is. One minute it's all going swimmingly and then after a simple and successful twitch for a Whimbrel it all goes pear-shaped. Or so you think.

Apart from the Whimbrel, which left me feeling all smug and content for a short while, it had been a little bit quiet this past week but as soon as I was out of action due to work on Thursday and Friday it all started to happen. In a 48-hour period all manner of birds were falling out of the sky everywhere you looked.

It is the nature of birding and listing in particular that on days you are unable to head off to see all and sundry, all and sundry appear. And it's painful when you are completely neutered and all you can do is press your nose up against the window and hope the following morning all these amazing discoveries will still be there for you to see. Most of the time that night the skies are as clear as glass and they all bugger off.

It has been an unusual spring to say the least. The cold easterlies in March set back many migrants. There have been, for example, less Ring Ouzels seen in Surrey this spring – I think I was lucky to get good views of the Clandon Park male last month – yet at least Wood Warblers have appeared in the past couple of weeks. And this is a bird that is in decline to the point of being non-existent in the county.

Passerines have been slow to make an impression and even the ever-reliable Wheatears have been at least a couple of weeks late. This migration delay has no doubt had an influence on the massive fall of birds seen on certain days recently. Unfortunately, for the most part these falls have occured when I have been 23 floors up at 1 Canada Square, Canary Wharf.

Thursday was a nightmare. Dodge texted and then rang to say a Wood Warbler was singing its head off and showing really well at Beddington and then word came in on Twitter regarding a couple of Little Tern and 11 Black Tern feeding very close to the causeway at Staines Reservoir. Add to the list loads of Whinchat, more than 40 Wheatear and more than a dozen Yellow Wagtail on Staines Moor and you get some idea of what was happening.

Overnight rain had acted as the catalyst for this massive fall and a similar pattern occurred on Friday, when I was also otherwise engaged. This time it was a confiding Grasshopper Warbler (down to just a couple of metres) at Staines Moor and a stunning male Black Redstart on my local patch, showing down to 20 feet in the horse paddocks on Mercers Farm. Give me strength...

I had to wait until Saturday to try and catch up with some of the action. Disappointingly, but not surprisingly, the Beddington Wood Warbler had gone, so my first target yesterday morning was five minutes down the road and the horse paddocks at Mercers Farm.

The Holmethorpe patch is an area I should spend more time working rather than chasing around ticking off birds for the sake of a list. But then I always say that and end up reverting to type. I'm more the nomadic patch gatecrasher – one could even suggest I'm a birding parasite, one who feeds off the efforts of others, rather than bothering to put the effort in and work a patch.

Much of the reason for this is I'm still quite green. I've only got about five years of proper birding experience behind me and so there are many hundreds of birds I would like to see before I get too old to put the miles in. So for the moment, and while the urge is still there, I'll twitch. Having said that I'm not interested in 500-mile round trips to see a bird like the Rock Thrush that turned up during the week. David Campbell dropped everything and went for it, successfully, but I can accept missing out now and again. I give myself an 150-mile radius at the very most, and even then that's stretching it and my wife's patience, more to the point...

Annie is the voice of reason, and every birder needs one of those.

Back to Saturday morning and it was with some relief that within a few minutes I had good views of the male Black Redstart, a real stunner, at Mercers Farm. He was quite active, perching on a fencepost before dropping to the ground to feed. So active in fact, I couldn't get even a half-decent digiscope photo. By the time I had him in view he'd moved further down the paddocks and before long had gone out of view.

Having missed the female Black Redstart a few weeks ago around the same area it was a very good start to the morning.

Next stop Staines Moor, which after a bit of a walk proved to be quite successful. I met up with Bob Whatley on the Moor, and he steered me towards five Whinchat, loosely following a small flock of 12 Wheatear, while another birder we bumped into on the boardwalk while listening to the Grasshopper Warbler reeling (no chance of actually seeing it) mentioned a pair of Hobby showing well, perched in a tree along the eastern edge of the Moor.

One had flown off by the time we got there but the other was sitting quietly and gave great views. 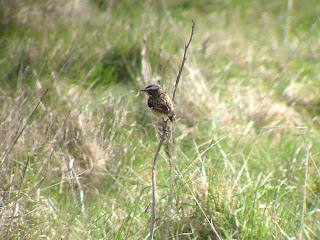 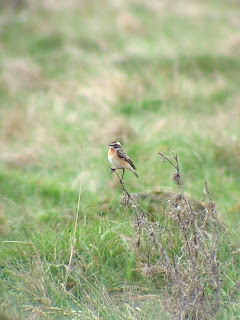 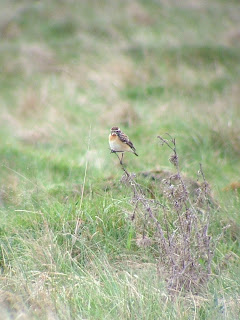 A bit later I found the female Redstart that had been present for a couple of days on Stanwell Moor – she was also showing well. 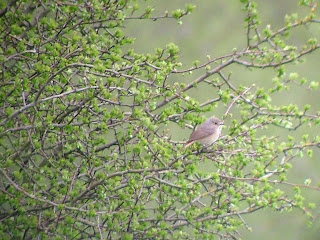 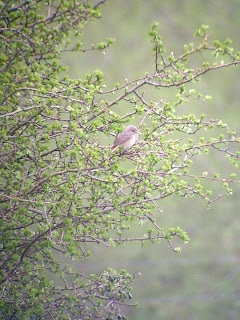 On the walk back to the car a Garden Warbler sang in the trees along with numerous Chiffchaff, Willow Warbler, Blackcap, Whitethroat and Sedge Warbler. So ended a good morning.
Posted by Factor at 00:19