They're on their way! It's taken longer than usual but the spring migration has started in earnest.

It has been a strange spring to say the least with the easterly winds cutting through Britain like a steely knife for what has seemed like an eternity, but all bad weather patterns have to come to an end at some point and now the winds have changed and migrating birds are making landfall en masse.

While there have been some noticeable arrivals on the coast, it has been inland where the lack of birds has been most apparent, and certain well-known birding areas have been unusually quiet. Canons Farm, normally the first patch to report Ring Ouzels, Wheatears, Black Redstarts et al, has only had two Wheatears up to now.

Holmethorpe, my local patch, can be a bit quiet at times but the odd unusual visitor has dropped in recently – a Little Gull and a Black Redstart seen by a recent visitor being highlights. The noticeable absence, however, of Blackcaps, singing Chiffchaff and a patch regular, Sand Martin, has been a talking point.

A reasonable amount of migrants have passed through Beddington this past week, including an Osprey a couple of days ago, but it is Tice's Meadow at Bagshot Lea that has proved the most productive patch in Surrey right now.

An Osprey cruised over the site on Monday, first seen by Sean Foote, and then yesterday Sean  reported four Slavonian Grebes dropping in along with a Black-necked Grebe in the morning. I missed out on the Slav Grebe at Staines so I had to go over to see them late in the afternoon.

I joined patch commander Rich Horton, Sean, Dave Baker and Matt Phelps on the mound at Tice's and in the space of an hour I saw a remarkable haul of birds. Three of the Slavonian Grebes – one showing well in summer plumage – the Black-necked Grebe and a pair of Pintail were a good start.

Skimming over the water frantically feeding were at least 30 Sand Martin and five Swallow. A House Martin had also been seen, but I couldn't find it, plus a few Willow Warbler had earlier been singing in the trees.

Maybe the highlight, however, was the first Yellow Wagtail of the spring on the edge of the lake with a couple of Pied Wagtail. This haul of year ticks brought my Surrey total up to 123.

An amazing year so far then at Tice's Meadow and it's likely to continue to compete with Beddington as Surrey's best wetland region in the county. Watch this space.

On Monday I was in Cliftonville, near Margate, to take my mum to a hospital appointment, and afterwards Annie and I went for a walk along the beach. It's a remarkable area in as much Margate, just a mile down the road, is all penny arcades and candyfloss, while Kingsgate Bay – half a mile in the other direction– at Broadstairs is quiet and has a beauty of its own, with spectacular sea cliffs and plenty of sand when the tides out.

The area is also excellent for birds at this time of year, although there wasn't time to venture further towards North Foreland, where a couple of Black Redstarts and a Long-eared Owl had been reported the day before. On our walk we saw plenty of Fulmars perched on the cliffs, as well as a couple of Brent Geese and a Rock Pipit. 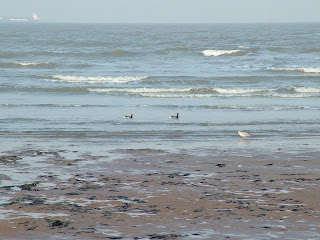 The following month is going to be busy on the migration front and I wouldn't be surprised if a memorable rare bird lands in Surrey to hit the headlines.
Posted by Factor at 10:38