How birding changes day by day. One day it's all Common Redstarts and other interesting migrants around every corner (Monday), then it's Arctic Terns (32 at Staines Reservoir on Tuesday) followed by Grasshopper Warblers popping up everywhere yesterday.

I got involved in the Redstart sightings, seeing a stonking male on Monday evening at Bookham Common. Just pure luck, but that is half the battle won. The battle is lost when you are neutered by your location ie. an office.  I was working at Racehorse Owners Association office in High Holborn on Wednesday when I received a text and a couple of emails telling me of a striking Arctic Tern on my local patch, showing really well on one of the Water Colour lagoons – just a five-minute drive from my house – before moving to Mercer's Lake.

This is fairly typical. Whenever I'm away, whether at a weekend or working in London during the occasional weekday an unusual bird invariably turns up. An Arctic Tern at Homethorpe is unusual to say the least – I've never seen one during the past four or five years – and the fact it was easy to view made it even more painful.

To make matters worse, it was still showing as the time approached 6pm. David Campbell let me know it seemed settled. I left the Holborn office just after 6.15pm and dash across London and was on my home on the 7.02pm train from Victoria, and still just had enough time to get to the patch before dark.

But it had gone. There wasn't even a gull on the lake or anywhere else locally. A massive disappointment.

To make up for it I went to Staines Reservoir the following afternoon where I saw three Arctic Tern (fortunately Ken Purdey was present, otherwise I would have had trouble identifying them) along with two Common Tern.

Wednesday was a miserable day due to the gale force wind. I didn't mind it at the reservoir, but it did me no favours at Staines Moor a little while later. Having said that there was plenty of song and activity on the walk down the path alongside the King George VI Reservoir, with plenty of Common Whitethroat, a couple of Sedge Warbler and then amazingly my first Blackcap of the year.

I was hoping for a Whinchat on the Moor itself, but found little apart from five Little Egret together on the River Colne (the most I have seen together here) and four handsome Wheatear. 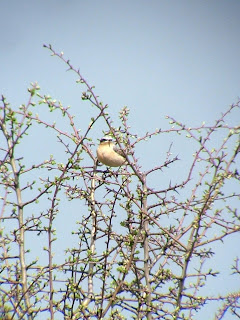 On the way home I dropped in at Bookham hoping to find a Nightingale, but instead found the Common Redstart again, sitting up beautifully on a branch in the late-afternoon sun, but frustratingly not long enough to get a decent digiscope photo.

amazing, but no matter who you are, finding other birds when looking for something else is all par for the course.

The formula for a successful birding trip is entirely dependent on being in the right place at the right time. Take Gordon Hay for example. He spent hours trudging around the Holmethorpe patch on Friday and saw very little, while fellow Holmethorpe birder, Graham James, was at home and happened to look out of the window about half an hour later – and at the same time an Osprey drifted overhead.

The weekend was another case in point. Grasshopper Warblers were found at Beddington and at Staines Moor. Adrian Luscombe had a brilliant day yesterday, seeing a Gropper really well, a Whinchat, Common Redstart, loads of Yellow Wagtail, three Cuckoo and a Hobby. Not a bad haul at all.

This morning I got up early and went to the Moor at first light. It was a beautiful morning. Crisp, a light frost was still on the ground, but the sky was blue and the sun was heating up the ground. Smashing. But none of that is relevent to a good day in the field.

In fact the morning was quiet. No Grasshopper Warblers, no Whinchat, no Common Redstart and no Yellow Wagtail. Plenty of common migrants – Common Whitethroat, Sedge Warbler, Blackcap, Willow Warbler and Chiffchaff, but nothing really to get the pulses racing. Best birds of the day were two Lesser Whitethroat, a Cuckoo and three Wheatear, one of which showed really well on a branch. 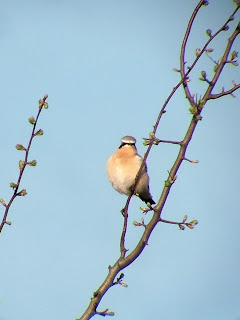 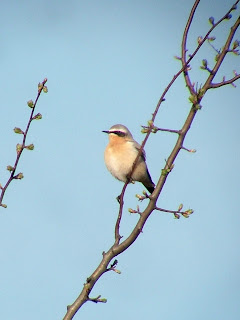 Not to worry. On the way home I went back to Bookham Common. This time I didn't see the Redstart, but another Cuckoo that flew overhead, and after a long search I heard my first Nightingale song of the spring. It didn't sing frequently but enough to find its location. There will be more in the coming weeks.


It is going to be difficult to fit anything in this week, but if a Gropper turns up nearby, I'll no doubt find an excuse to go for it.
Posted by Factor at 21:00