BACK TO BIRDING – MALLORCA PART 1

What a wonderful week. It's been a couple of weeks since Annie and I went to Mallorca for a holiday. We hired a magnificent villa with a pool about five miles west of Pollença on the edge of the Serra de Tramuntana, the mountain range that stretches down the north-western edge of the island. 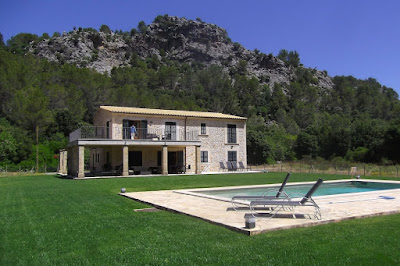 We were able to get a fantastic deal through James Villas, and the Vall d'en Marc villa surpassed our expectations. It was huge, with four bedrooms – all en suite. It had a balcony where you could sit and have breakfast immediately outside two of the bedrooms, and a large terrace area in front of the spacious living area downstairs which was perfect for relaxing in the shade and just staring at the magnificent view in front of you.

We couldn't believe our luck.

What we also couldn't believe was the weather when we first arrived. It had been threatening to rain after we ate a hearty late lunch in Port de Pollença.

Then about an hour after we unpacked our suitcases and had walked around admiring our new home, a thunderstorm passed over which dumped rain of biblical proportions for about 20 minutes. You couldn't see the mountains ahead of you it was so heavy.

I had already been looking out for birds before the storm. Around the perimeter fence a couple of Spotted Flycatcher darted around, perching on the fence, as did a Cirl Bunting. A Raven cronked overhead.
As the week went on, these birds would become a regular feature, as would the sound of Nightingale singing in the trees. Listening to their song first thing in the morning, and later while we ate various barbecued fish and king prawns and drank lovely bottles of Mallorcan white wine during warm evenings out on the terrace, will stay with me for a long time.

Once the storm had rumbled by we were able to settle down with a glass of wine after a long day travelling and look out at the mountains. A pair of Cattle Egret flew past, and as the light dimmed a couple of Stone-curlew called out down in the valley somewhere.

As it got darker the first of many calls from at least three Scops Owl echoed around the valley.

Sunday was a day for relaxing around the villa and an opportunity to look round my new local patch, which extended back down the track for about 400 yards towards the main road.

First thing in the morning, as the Nightingale sang, along with Cirl Bunting and the added chatter of Sardinian Warbler, I noticed another bird perched up on the wires at the end of the villa. It was a Woodchat Shrike, one of two local birds I would see often during our stay. Later, I fleetingly caught sight of a Hoopoe that I flushed out of a tree. 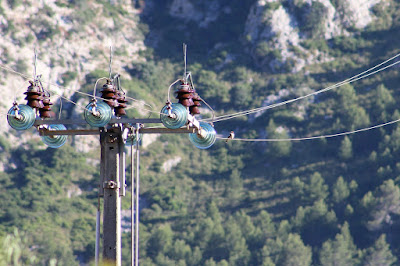 Added to the list were a Griffon Vulture and a Booted Eagle, along with three Raven, a pair of vocal Kestrel, a Yellow-legged Gull, and another Scops Owl calling during the evening.

On Monday we headed up the mountains for lunch near the Lluc Monastery, where we ate snails followed by kid goat. Sounded great, but both were too salty for our taste. Never mind, it was a lovely setting, and we were accompanied by a number of Crossbill flying around the pine trees, and a few hidden Serin.

I had a wish list prior to our visit, with four species in particular at the top of it: Eleonora's Falcon, Black Vulture, Blue Rock Thrush and Balearic Warbler.

Disappointingly, we didn't see one raptor while we were up in the mountains, but I made up for it once we were back at base.

Another walk around the patch resulted in the pair of Woodchat Shrike in the trees, and then I spotted a huge vulture circling high up. 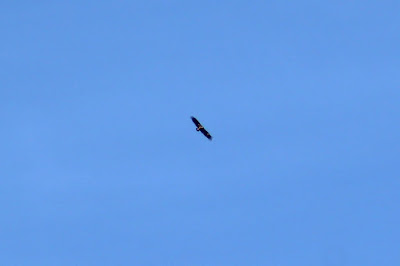 It took a bit of study, but its shape, and the fact its wings hung lower than a Griffon Vulture as it circled, plus its very dark appearance against the sky and greyish-white legs made it a nailed-on Black Vulture.

I was delighted with that, but the best day of the holiday was yet to come.
Posted by Factor at 07:25