The S'Albufera National Park, south of Port d'Alcudia is one of the finest wetland reserves in Europe, and while I didn't have a great deal of time to pay it a visit while in Mallorca I still had to go there.

What is so apparent in Mallorca, especially if you are located in the north of the island, is that nowhere is very far to get to. Back in Britain, a twitch to the coast usually takes about an hour and a half to get to from Redhill, often much longer, whereas the S'Albufera reserve was only 30 minutes away from the villa.

In fact, the walk down the footpath into the reserve proper probably took as long as the drive there.

Typically, as with many reserves in Britain, it doesn't officially open until 9am – long after the best time of the day to go birding. We also had the misfortune to bump into a couple of wardens as we ventured down the path to the reserve centre at 8.30am.

They insisted we couldn't enter the reserve for half an hour, even though the gate wasn't locked and the walk to the centre itself is about a mile and would be open by the time we got there. Also a couple of joggers came past from their direction and nothing was said about them!

Anyway, we hung around for a while until they had gone and continued on our walk. The reserve entrance and path runs alongside a canal with plenty of reeds and decent habitat. We missed a Little Bittern that flew down stream, seen by a Swedish birder we had earlier bumped into, but it was still full of activity.

There were plenty of Spotted Flycatcher around the entrance and Cetti's Warbler, and as we walked down the path a Hoopoe flew over. It wasn't long until we noticed a Night Heron perched in the bushes on the bank opposite. Further along the path we came across a roost of Egrets in the trees, at least 30 Cattle Egret, with a few Little Egret and another Night Heron.

Once at the centre (which was still closed after 9am) I ventured to some of the hides in the immediate vicinity, the first being the closest hide to the south. 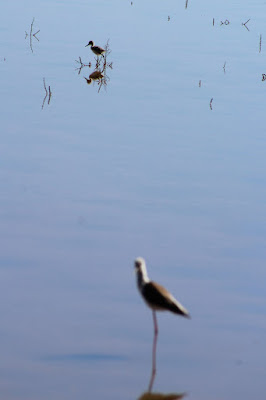 The wetland habitat had dried up quite a bit but there was still plenty to see. There were numerous Black-winged Stilt, some with young, likewise Kentish Plover and Little Ringed Plover. Two Purple Heron flew over the scrap, landing in the distant reeds, while directly in front of the hide one of two Purple Swamphen showed exceptionally well. 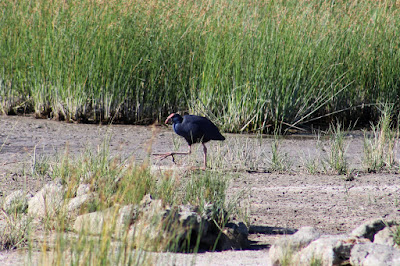 A walk over the footbridge to the north featured another Purple Swamphen, plenty of Coot (but none of the Red-knobbed variety), and two more Black-winged Stilt flew overhead.

At the first hide on the north side of the canal, another Purple Heron flew over, plus more Black-winged Stilt featured, as well as Avocet and Common Tern.


Reluctantly, I had to leave well before I wanted to. The reserve is huge and so full of decent birds, it would day an entire day to get the most out of it.

Not to worry, it had been a great morning, which concluded with four Zitting Cisticola calling and flying around the footpath on the walk back to the car. The reserve is a must for any birder visiting the island. I think a trip there during migration will be on my agenda at some point in the future.
Posted by Factor at 22:34