If you go abroad a fair bit and you like birding you must come back to Britain, stare up at the sky and wonder, what's the point?

I've felt a bit like that since coming back from Mallorca this past ten days. We are creeping into July, with the weather still disappointing, and birding locally has become fairly predictable. OK, so there are a few rarities around the country to check out but most are too far away to really want to make the effort. A Common Rosefinch at Walthamstow Marshes would be a bird I would like to see, but it is situated in area of north London which is a pain to get to. I have contemplated taking the train, but, in all honesty, I can't muster much enthusiasm.

My apathy is mainly due to recently having witnessed some amazing birding spectacles in Mallorca, so it will take something unprecedented back home to get me motivated.

I know I will get back into the groove come the autumn, probably after yet another poor summer, but by then I have the intention on heading off somewhere else for a week in the sunshine again before the gloom of winter is back upon us.

As I wrote in the previous post, I had four target birds to see in Mallorca, and by the third day I had seen the first of these, a Black Vulture.

The number one target, however, was Eleonora's Falcon. These raptors are the jewel of Mallorca, and a species any birder visiting the island will be hoping to see. They are incredibly rare visitors to Britain, but there are several hundred pairs breeding on the Mallorcan coast, including along the cliffs of the Cap de Formentor.

We decided not to travel up to the winding road towards the lighthouse, as it would have meant spending half the day away from our precious villa, a place Annie and I were becoming quite attached to and reluctant to leave for too long. Our time on the island was supposed to be for a holiday, first and foremost, and making an effort wasn't high on the agenda.

However, I was keen to walk along the famous Boquer Valley, not far from Port de Pollença, one morning. The valley is a must for birdwatchers, particularly during migration in spring and autumn, and a place where one may see Eleonora's Falcon, as well as my two other target birds, Blue Rock Thrush and the warbler endemic to the island, the Balearic Warbler. 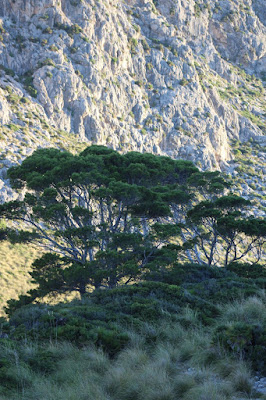 We left the villa very early so as not to be caught out in the fierce sun late in the morning. The problem with setting out at first light appeared to be the fact the birds didn't seem to be that active, and all was quiet with the rising sun shaded by the sheer rock face on the eastern side of the valley.

By the time we had walked along the 1.9 kilometres to the cove at the end of the valley we hadn't seen much apart from plentiful Sardinian Warbler and a few House Martin.

There is always the nagging worry you look forward to a morning at a popular birding site and end up seeing very little! I needn't have worried, though. As the morning warmed up so did the birding. 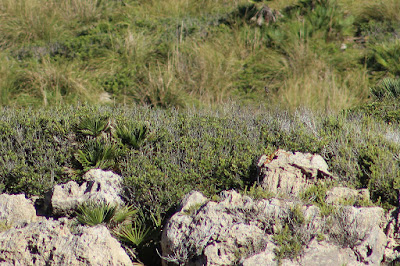 The area of the valley just before the terrain drops down towards the sea to the cove is apparently a prime sport for Balearic Warbler. And it wasn't long before I heard one singing in the distance. I caught a brief glimpse of it as it flew around the scrub, and then a second one began to sing, slightly further away.

This one was less mobile, and eventually I locked on to my first Balearic Warbler through the scope, singing high up on a bush. It stayed put for a couple of minutes before darting off to other areas further up the valley.

A stroke of luck, then!

Things began to pick up on the walk back. A couple of Crag Martin flew by, another first for me and then another treat as we approached a stone wall that cuts across the path.

Decent bird sightings are often about luck, being in the right place at the right time and I was just about to have a fantastic stroke of it.

I saw a dark bird fly low across the wall before landing on it directly in front of us. A look through the scope confirmed my hopes – a stunning Blue Rock Thrush that had recently collected food.
Walking back another excellent sighting – a Booted Eagle flew down the valley heading south.

Looking across towards Port de Pollença before we arrived back at the car, I noticed two more Crag Martin were feeding above the fields.

It had been a good morning. No Eleonora's Falcon, alas, but I wouldn't have to wait too long before the highlight of the week.
Posted by Factor at 20:45