It's been a case of back to the grindstone this past couple of weeks. Re-living holidays can only last so long, especially with the British summer to bring us back down to earth with a bump.

The couple of occasions I've been birding since returning from holiday, however, haven't been too bad weather-wise, and both times have produced decent birds.

I couldn't help but twitch the Common Rosefinch at Walthamstow Marshes. I took the decision to travel there by train early last Wednesday morning prior to going to work.

The journey to north London was tortuous, taking three hours. I have the misfortune of travelling to London by train a fair bit at the moment and the dispute between Southern Rail and their guards has caused no end of anger and frustration.

None more so than last Wednesday. Even at 6.30am there was chaos – cancellations, delays, trains arriving but not leaving. I really feel for those who travel at this time of the morning every day of the week. I'm just glad I usually only have to go to London three times a week at the most, and even then well after rush hour.

I ended up on the Bedford train to Blackfriars, followed by the tube to Liverpool Street and the overground to Clapton. After that it was a walk of just over a mile, along the River Lea and on to Walthamstow Marshes.

It's strange place – a decent nature reserve next to the urban sprawl of the Hackney borough. It reminded me of Beddington, the difference being I could venture out there after dark if I had to. I did for the Long-eared Owl last year.

I wouldn't do that here.

But it is well worth a visit for the wildlife during the day. Reed Warbler, Sedge Warbler and Reed Bunting were all plentiful. Common Tern breed here, as do Peregrine Falcon.

It's also a popular destination for one particular Common Rosefinch. It had stuck around for a few days, which was fortunate for me, and had been seen, predictably, ten minutes before I had arrived.

It had already struck up a routine – a circuitous route that took it over the river to some feeders at the back of some flats, followed by the Crown and Anchor pub, some bushes on the marsh side of the river, followed by some trees either side of the railway line. 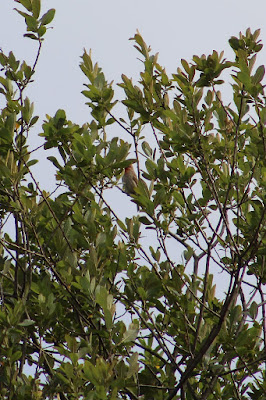 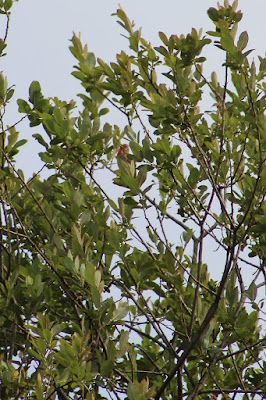 I stood next to a favoured tree and it wasn't long before the Common Rosefinch perched high up and started to sing. It stayed for a couple of minutes, partially hidden by leaves, before heading off, calling, to another vantage point.

It was quite mobile, but was a smashing bird to see and to hear – a male in summer plumage. The first sighting was the best I would get (hence the rubbish images) but it flew around a fair bit for the next hour, including posing on an aerial on the flats.

And that was that – I had to head back into London for work.

My next birding destination was Margate on Monday. I had to take my mum to a hospital appointment in the afternoon, and on the way to her bungalow at Palm Bay I was forced to stop when I noticed ten Mediterranean Gull on the grass by the road between the Bethesda Medical Centre and Foreness Point.
I've begun to tot up a reasonable bird list on my visits to Margate and Cliftonville, with these gulls being a new addition. At some point I must spend a couple of mornings here during the autumn to see what turns up. It's a great spot. 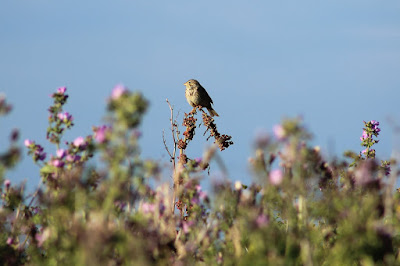 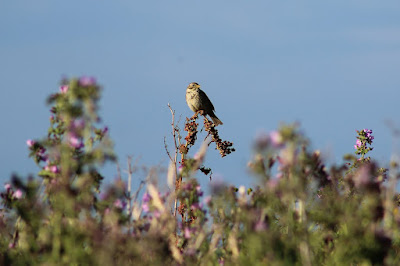 On my way home that evening I quickly stopped off at Foreness Point. Along with plenty of Meadow Pipit, I spotted a pair of Corn Bunting. I'd clocked one the last time I had been down, so it was good to see these birds had taken up residence here.
Posted by Factor at 13:27