Birding is one of those interests where one should never expect certainties. Before Annie and I went to Mallorca, I wrote down a list of birds I hoped to see. It was a pretty long list – many were more wistful thinking than others – and I had at least 15 birds I'd never seen before on it.

After three and a half days I'd already totted up six of these, but the one glaring omission was Eleonora's Falcon.

Having walked the Boquer Valley on the Tuesday morning without spotting one and deciding not to drive to Cap de Formentor, I was beginning to wonder where one would eventually appear, if at all.

We took a well-earned afternoon off and lazed on the terrace of our fabulous Vall d'en Marc villa in the Marc valley, about five miles west of Pollença.

It was such a great place for seeing birds, with more sightings of Griffon Vulture, Woodchat Shrike, Spotted Flycatcher, Sardinian Warbler and Cirl Bunting.

As the sun dropped lower, the Nightingale began to sing once again in earnest. We had plenty of wine in the fridge to increase our mood for relaxation and I got going with cooking a light evening meal – Spanish Omelette.

It was 7.30pm, the sun had disappeared behind the rocks at the back of the villa but was shining on the mountainside opposite. The air was warm. It was an idyllic environment.

With the air still, it was noticeable that there were a few insects flying around us. As I served up our evening meal out on the terrace, I happened to look over to the east and noticed a number of birds flying around above the track towards the main road.

My luck was well and truly in.

At least ten Eleonora's Falcon were feeding above the track, just 200 metres away. My serving of omelette would have to wait.

What happen next will stay with me for a long time. The Eleonora's Falcons flew closer and closer until they were feeding almost directly above the villa and the surrounding valley. It was a magnificent sight.

They stayed for at least an hour. As the light faded, we were able to sit and watch these wonderful birds, 16 of them in total, quietly going about their business, floating around the valley feeding on insects as we also ate our meal and drank our wine. 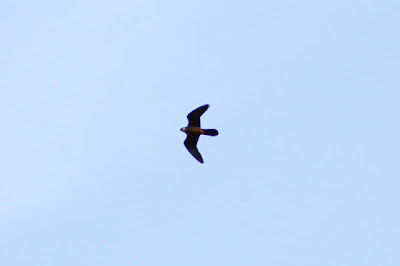 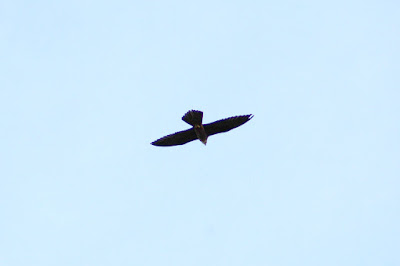 It was an unexpected treat, and one that would be repeated twice more during the week. Eight Falcons returned to feed two days later and 13 again on our last evening. 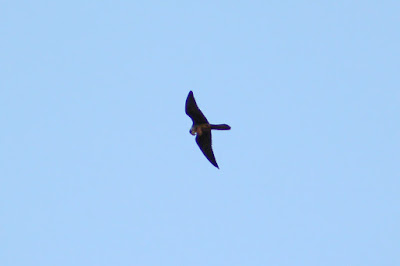 The Friday night spectacle was equally memorable. I hadn't seen the falcons at first while scouring the vista with my binoculars that evening, but what I saw was amazing.

I thought I was looking at a swarm of insects in the distance, but in fact it was at least a 1,000 Swift frantically feeding above the ridge of the mountains. In amongst them were the 13 Eleonora's Falcon, also gorging on a feast of invertebrates.

The Eleonora's Falcon are notable for changing their eating habits during the year. Normally they will feed on insects, such as dragonflies, which they catch in their talons and eat on the wing, but during their late-summer breeding season, they change their diet and feed on other birds. What was interesting here was that the Swifts and Falcons were happily feeding alongside each other. Later in the summer the Swifts would be potential prey themselves.

We were extremely fortunate in that the villa was situated down the western end of the valley, which created a funnel-like effect and an area where insects would accumulate during the evenings – and as a result so would this group of Eleonora's Falcon.