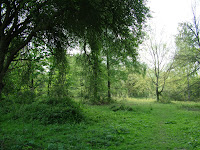 I took a visit to Bookham and Little Bookham Commons this morning. It was a beautiful start to the day - the sun was up, although it was a bit too cold for the time of year.

The Bookham Commons made for a really satisfying walk. Warblers were plentiful, with a Garden Warbler being my first sight, followed by Chiffchaff and Willow Warbler, and numerous Blackcap and Whitethroat. A Kestrel flew by, the only bird of prey I saw all morning, while I also saw a Reed Bunting and Yellowhammer.

The woods were a symphony of birdsong, with the song of one bird standing out above all others - a Nightingale. I heard two during the morning, and while I failed to see the first one, I was lucky enough to catch a glimpse of the second, but it took an age - more than an hour - to spot it. The song was fantastically pure and dramatic, and the bird was clearly only feet away in the undergrowth, and although I scrambled through the low scrub and dense thicket to get a decent vantage point, this bird was mightily difficult to see.

But it was worth it to get my 132nd different bird of the year, and it being a Nightingale - the Pavarotti of the bird world - a really satisfying one at that.