TO BE OR NOT TO BE A BIRDING SITE

It's funny how some places are on the map for the number of birds that visit and others aren't. It doesn't matter if a place looks like a dump, if birds fancy it they go see in their droves.

My local patch, Holmethorpe Sand Pits, is a mixture of beauty and the beast. The beauty is the Spynes Mere walk and the surrounding countryside and the beast is the landfill site that takes over the horizon as you look across from the Water Colour housing development. There is also the smell from the disinfectant - or whatever it is they use to spray over the area. How can I put it... it's like the smell you get when someone has been on the loo and covered up the pong with air freshener.

No matter, since the turn of the year there have been 121 different species seen at Holmethorpe as of today - not a bad count by anyone's standards - and there have been some belters too, including the Ferruginous Duck that appeared a couple of months ago.

There are other places to that beggar belief at the amount of really top-notch birds that flock there - places I have yet to visit. Beddington Sewage Works is one - not exactly a holiday destination but, boy, do they get some decent visitors.

Another is the London Wetland Centre at Barnes - more a birding theme park - Disneyworld for birders if you will, but they have some really nice rarities, like the Pacific Golden Plover, which also appeared at Beddington last week. It must have read a brochure or something to know where to go. 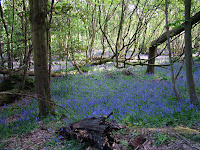 And yet, there are other destinations that aren't on the birding map. One is Tilburstow Hill. I had a walk round there this evening. It is where I grew up for most of my childhood - I used to live at the farm at the top of the hill. I remember Tawny Owls and Barn Owls were a regular feature in the evenings - it was a great place. I also remember when the storm of 1987 ripped the Common apart and most of the oak and beech trees were uprooted - it was a terrible sight. More than 20 years on and the Hill has been transformed into a fantastic beauty spot - but apart from a Treecreeper and the odd Blackcap and a Greater Spotted Woodpecker, there is bugger all there for birders.

I went back home via Holmethorpe, and saw two Common Terns resting on a raft on Mercer's Lake, a Sedge Warbler was singing heartily, also at Mercer's Lake, and there were Swifts, Swallows and House Martins flitting through the air feeding. For birds, some places just have the right mojo, while others just don't.
Posted by Factor at 20:37