Apologies for the pun headline. Couldn't resist it. I met another birder, Neville, at Staines Reservoir yesterday, who helped me spot the Black Tern. He went off to Staines Moor, where later I discovered online that he had seen plenty of decent birdlife. 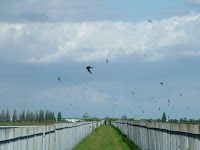 I went back to Staines in the afternoon, paid a short visit to the reservoir, where the highlight was a cloud of Swifts swooping over the causeway. An amazing sight. I then paid a visit to Staines Moor, where there was an abundance of activity. I had my first decent view of the Cetti's Warbler along the pathway to the north of the Moor - it came out of its hideaway and stood on a fence briefly, flicking its cocked tail nervously before disappearing into the undergrowth once more. It wasn't long before I had sight of what I had gone there to see. Perched on tufty mounds on the Moor were five Whinchat (131). Further along I counted six Wheatear, one of which was possibly a male Greenland Wheatear (I wouldn't have known that if it wasn't for Neville's input on the London Bird Club website).

I'd driven about 100 miles in total during Sunday, but in the end I got what I wanted, but it's getting harder to add to the Surrey list for the year.
Posted by Factor at 09:47