HEY, IT WAS MY BIRTHDAY!

Seeing as it was my birthday yesterday, it gave me the ready excuse to indulge in my favourite pastime without feeling guilty. I dragged Annie off to Oare Marshes in Kent with my new scope and even she had to admit it was a really enjoyable day. 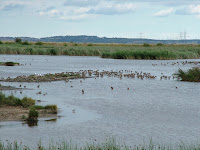 We didn't get there until late morning, but interspersed with a spot of lunch at the Three Musketeers in Oare village (good food, if a tad pricey) we spent about five hours walking around the site. I had visions of seeing Spoonbill and Marsh Harrier - two birds I really wanted to see - but neither were present. The weather was too windy for Bearded Tits to make any sort of appearance either, but never mind. 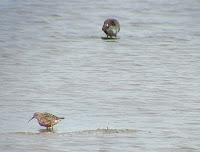 We did see plenty of Black-Tailed Godwit. At Holmethorpe we have had one solitary bird all year - here there were more than 1,200 of them. There were also plenty of Golden Plover, Dunlin, Redshank, quite a few Knot, a solitary juvenile Little Ringed Plover, a Whimbrel, a Water Rail diving for cover, four Little Egrets, Common and Green Sandpiper, but best of all at around 5pm, eight Curlew Sandpiper.

The bird Annie enjoyed watching most of all, however, was one of eight Yellow Wagtail we saw flitting around the perimeter on our walk. This one was on the footpath, and we got quite close to it.

So, a good day, which ended with a decent curry at a local restaurant in Redhill.

Sunday meant an earlish start (for me at any rate) to get to Beddington for 9.15am. Peter Alfrey was fronting a tour of the site along with another of the Beddington 'Massive', Dodge. It was a fine tour. More than 40 people turned up for the morning, which included a tour of the inner sanctum. While there we saw Green and Common Sandpiper plus Tree Sparrow, Common and Lesser Whitethroat and a Greenshank on the main scrape.

Best of all, though, was one tick that has irritated me like a patch of exczema this year. Thanks to Dodge and Peter I got to see my first Yellow-Legged Gull (144) for 2010. Am I glad to get that one out of the way. I'll no doubt see them all the time now.
Posted by Factor at 20:18