I went to Burpham in West Sussex on Friday to satisfy my fascination with the juvenile Pallid Harrier. I arrived at 9.30am and made a point on setting up along Coombe Lane, which runs east along the bottom of Peppering Lane. The stubble field opposite is where the best views can be experienced.

This Harrier is a creature of habit, and tends to make the same circuitous route around the area, starting from the north near the region called The Burgh, before arriving at the bottom of the hill half-an-hour later in the field where rich pickings of rodents can be had. It was here where it drifted silently low across the middle of the field, above a game strip, twice during the morning.

I moved to a better vantage point on the corner of the road in the afternoon, where Beddington crew member Mark 'Posh' Spicer parked up and walked over to set up his scope just after noon. I explained (acting as the keeper of knowledge of this bird's habits to anyone who would listen) how the Harrier would arrive at this field every hour - it had already been through at 9.00am, 10.00am and shortly before 11.00am. He wouldn't have long to wait.

Two hours later and still no sign of the Harrier. Burpham is surrounded by arable fields and the raptors love it here - which is handy when you have time to kill. During the lull we had great views of a number of raptor species. Earlier in the morning a Hobby flew across the field and perched in the trees, close to where a Tawny Owl had hooted at about 10.30am. I had also seen plenty of Common Buzzards - at least 15 of them - plus a couple of Kestrels.

When the wait went into its third hour there was talk that perhaps the Harrier had chosen this moment to set off back over the Channel. As Mark suggested, it would have to leave at some point, and being a bird that migrates during the day, it could decide to leave at anytime.

While we continued our vigil, there were plenty of other raptors to look at. During the afternoon, circling in the valley ahead, three Red Kite were searching for food, and then a Sparrowhawk was seen circling high above us with a few Buzzards.

Burpham is an unusual village in as much the road that leads to it ends there. If you arrive at Burpham you need to turn back to go anywhere else. The locals, including the farmer who's land the Pallid Harrier had decided to hunt on, had been extremely hospitable and helpful. As long as the birders didn't intrude on private land they were free and welcome to walk anywhere they liked.

A couple of locals, however, didn't have such a generous outlook. Both coincidentally pulled lemon-sucking facial expressions. An older women (miserable old bag) and a gentleman (miserable old git - probably related) were both driving out of the village and were clearly upset that so many people had camped up in their back yard. Police involvement if cars weren't moved was threatened. A shout of "wankers" out of the open car window by the same happy chappy on his return journey went ignored. You can guarantee there will be a small minority of older people who live sufficiently unfulfilled, small-minded existences, whose sole purpose in life is aimed at upsetting a good atmosphere. It failed.

A couple of birders from Margate decided to walk up Peppering Lane, in the direction of The Burgh, to see whether the Harrier was hunting for rodents there. About an hour later they returned confirming the bird was seen quartering the area. I knew, from past experience, it should appear down in the valley where we were standing in about half-an-hour. Sure enough it did.

I picked it up as it flew in from the north and cruised over the edge of the field where it immediately spotted something and dived on a prey. The Harrier then flew to the edge of the field by some trees and tucked into its afternoon meal. While it ate, the sound of people chattering was noticeable, but it fell silent when the Pallid Harrier then flew up and drifted across the game strip once again. 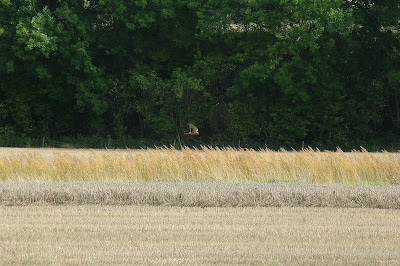 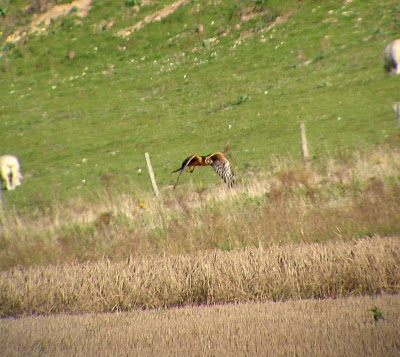 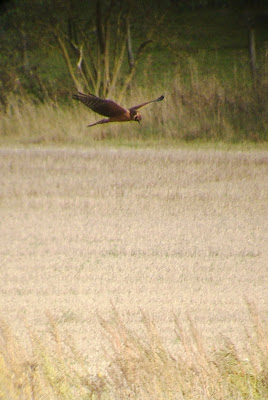 In the film Billy Elliot, Billy's father - from a coal-mining village background - goes to London, without his son's knowledge, to watch him play the lead in Swan Lake. When the adult ballet dancer Billy makes his spectacular entrance, his father gasps in awe.

You could hear audible gasps when the Pallid Harrier made its appearance, drifting so slowly it almost came to a halt - without effort - across the field. It was pure art. I have never seen a bird before that could create such a stir.

It has poise. The strikingly marked head angled downwards - eyes transfixed on the ground below. It has colour. Orange, black, white, yellow ochre, burnt sienna (it is the one bird, in my view, where the juvenile plumage is superior to the final adult version) - all of these elements make this bird one of the most remarkable sights I have seen in years.

Amazing. But also frustratingly for me, I managed to mess up any chance of a good digiscope photo. Moving objects with my scope and the digital camera that I use without a jig to keep it still just don't work together. Also the anticipation after the long wait and the excitement just got to me. I would have been better off simply watching the bird than trying to aim it in the middle of the viewer through the scope.

Mark then left, satisfied with his views of the bird. I stayed for one more Harrier experience. Another hour went by - by this time it was 4.30pm. While we waited I picked up another raptor circling high above us with a Buzzard to the north - a male Hen Harrier. Another amazing bird - its light grey, black and white plumage standing out in the blue sky. Fantastic stuff.

Then another bird of prey, a Peregrine - the eighth raptor species of the day - flew across the ridge heading south.

The Pallid Harrier made its final appearance just before 5pm. This time it caught a rodent, only for a Buzzard to swoop down and steal it. It went back for another quartering session along the strip without success, and then flew over the treetops and out of sight. The final act of a memorable day.
Posted by Factor at 22:16