An early start on a bleak, grey and damp Wednesday morning. After the excitement of the Pallid Harrier the day before, I headed off to Staines Reservoir in the hope of spotting the juvenile Shag that had dropped in on Monday evening.

I arrived just after 7am and met up with Bob Warden, who was already set up at the eastern end of the causeway. On the way I had watched two Black Terns feeding on a north basin that was as still as a milk pond. Bob had been studying a grebe at the far end of the south basin for about 15 minutes trying to work out what it was. It was difficult because it didn’t stay in view for very long – it was busy diving. Bob concluded it was a Red-necked Grebe.

At this stage there was no sign of the Shag, so we focused on the water to see what was about. I picked up two Black-necked Grebes before they flew further away on the north basin, while Bob, after finding a Common Sandpiper, located another grebe, close to the banking at the eastern end of the south basin. At first I thought it was the same bird we had been looking at earlier, but it had a shorter neck and it wasn’t long before we deduced it was a Slavonian Grebe in between summer and winter plumage. 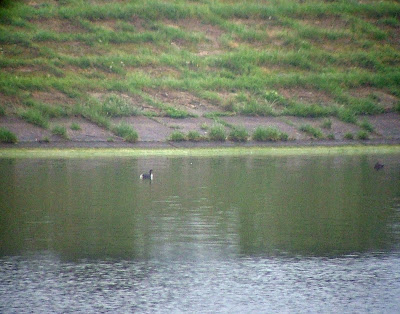 So with the Great-crested Grebes that are always present, that was four different species of grebe, including all three of the rarer ones, all on the same reservoir. While Burpham the day before is big on raptors, Staines Reservoir is one of the best inland sites in the south-east for grebes.

A walk back down the causeway brought up three Wheatears, which kept ahead of us all the way to the western end. We gave the north basin rafts another look, as a number of Cormorants had landed on them, and in the middle to the front of the raft, the juvenile Shag (162) had reappeared, sitting quietly for a while before falling asleep. 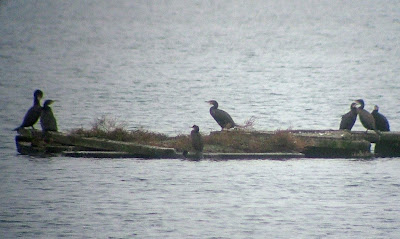 Noticeably smaller than a Cormorant it has the distinctive steep forehead. Easy to spot the difference.

The Wheatears hung around long enough for veteran birder Frank Cannon, who arrived at about 9am, just before I had to leave. On the walk back to the car, I spotted a couple of Yellow Wagtails on the path. 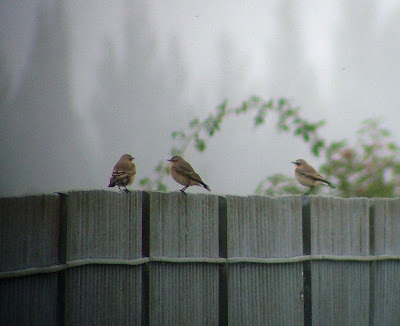 So, another good session, with a third new bird on successive days. There was no time to go to see the newly identified Long-toed Stint at Weir Wood reservoir near Forest Row, but I’ll give that a go later in the week. I might also go back to see the Pallid Harrier again – a bird just too hard to resist.