After a decent run, I've only had one proper birding trip out since last Friday. In between times, the summer has returned (better late than never, I guess) and with it raptors are playing a prominent role.

Prior to the heatwave Annie and I visited Winterfold on Sunday, where there were more than 30 Lesser Redpolls buzzing around, just to remind us that the end of the year is rapidly approaching. But then the sun broke out on Tuesday afternoon and since then it has been blazing sunshine all the way.

On Tuesday morning I saw a Tweet from Johnny Allan that a Marsh Harrier had flown south from Beddington. That usually means, so long as it doesn't deviate off course, that it will end up at Holmethorpe. I saw the message about ten minutes too late. I dashed over to the patch on an overcast lunchtime and set up on the Water Colour mound with a good view of the North Downs.

I did see a big raptor in the distance that didn't look like a Buzzard, it may have been a Red Kite, but who knows. A Sparrowhawk soared overhead, flapping its wings occasionally. But no Marsh Harrier. When I got back home, I discovered Graham James had seen the Harrier flying over Mercer's Lake five minutes before I had got there. Damn it! I usually look at Twitter frequently when working on the Mac, but this time I hadn't.

While work projects are obviously important to focus on, Annie and I felt we had to take advantage of the decent weather while we could each day this week. For a couple of late afternoon outings we went to Newland's Corner near Guildford. Plenty of raptors about there Including a Sparrowhawk, a Kestrel and a few Common Buzzards. The highlight was a Red Kite that flew south over our heads, circled for a while with a Buzzard before disappearing into the distance.

Yesterday morning I headed for Weir Wood reservoir at first light in the hope of seeing the Osprey that had been there for the past four days. I had to abort the mission, however, because one of the symptoms of the autumn heatwave is thick early morning mist and the fog at the reservoir was reluctant to clear.

I had to be back home by lunchtime, so rather than waiting at Weir Wood, I left for Burpham for, you guessed it, another sighting of the Pallid Harrier.

I opted to go to the northern end of Peppering Lane first, where a handful of birders were already set up at about 8.30am. The Harrier had apparently been seen to the north, but all was pretty quiet at this time, with only a couple of Common Buzzards and a Raven heading north to keep us occupied.

I went back down the hill to the field where most of the best photos of the Harrier have been taken and waited there for a while, but nothing. A couple of Kestrels and a Sparrowhawk were added to the morning list.

Another trip back up the hill and this time the Pallid Harrier had made an appearance, albiet about half a mile away. It was quartering the fields to the north before drifting south near to some farm buildings where it was joined by a female Hen Harrier. The pair circled and climbed high into the sky, interacting playfully together, before we lost sight of the Ring-tail.

The Pallid Harrier then headed north again and was lost from view. Most of the 15 or so birders that had gathered focused on looking north to wait for it to reappear, but I knew from previous experience that this bird had a habit of moving to another area without anyone being aware. It would normally appear after about 30 minutes, seemingly from out of nowhere, in the field at the bottom of the hill and quarter the game strip before flying above the trees and into the next valley.

I mentioned this to anyone who would listen, but they resolutely stuck to their guns and stayed put.

I went back down the hill and set up shop along Coombe Lane. And sure enough, right on queue at 11.00am, the magnificent Pallid Harrier appeared again, and quartered up and down the field for a few minutes in front of me, before flying off over the ridge as usual. 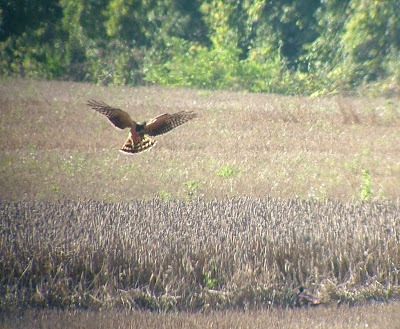 There were only two of us who saw it for the duration of its visit - another couple arrived just in time to see it briefly before it flew off.

I went back up the road to inform everyone there, and a number followed me back down the hill. I explained it was likely to return an hour or so later. One guy had been down on Saturday, and had stood in the same spot for 11 hours and not seen it. I had to leave, so I hope they got to see it in the end.

Credit should be given to the Duke of Norfolk estate for a fantastic environment they have created for birds, particularly raptors. The Duke's appreciation of conservation has been crucial.

He set up a 'Partridge restoration project', for example, which has been a huge success. The Grey Partridge was virtually extinct from the area back in 2003, but with the increase in biodiversity during the past eight years the Grey Partridge count has gone through the roof. Other birds to have benefited are the Corn Bunting and the Skylark, of which I saw plenty of during my three visits.

Sussex now has a surplus of Grey Partridge for shooting, which reinforces - in the Duke's words - "the link between game shooting and conservation".

While the estate has created a game shoot heaven, it has also meant raptors migrate to the area. Short-eared Owls are also commonplace in the winter.

The much-twitched juvenile White-tailed Eagle spent some time on the estate when it first appeared this spring, being helpfully left dead foxes to eat by the gamekeeper, and in the Pallid Harrier, the new rare addition to the impressive list of birds of prey seen in the area, the estate has had a bird that will live long in the memory.
Posted by Factor at 21:34