When Twitter flashed up a tweet that there was a Grey Phalarope on the Queen Mary Reservoir this morning, it was only going to be a question of time when I decided to go for a look.

I'd already managed to dip a Dunlin that had been present on the Water Colour Lagoons for the past couple of days. A Dunlin isn't normally a bird I'd dive out to see, especially as I've already seen a couple this year on the patch, but this one was a bit different because it was showing fantastically well to less than ten feet away, very close to the footpath that splits the two Lagoons.

I went over twice but just couldn't find it anywhere. Bloody ridiculous. Dunlin blindness stuck me big time. Still, the prospect of seeing a Grey Phalarope was too tempting, although the fact the original sighting was mentioned as a Phalarope sp. didn't bode well.

I've not been to this reservoir before, and I knew as soon as I arrived just after 6pm I wouldn't vote this the most popular site in the world. The reservoir is massive, and while you can see quite a bit of it from both sides of the Yacht Club, you needed the Hubble Telescope to get a good view of the west or southern edges and even then it was going to be desperately hard to identify anything.

There were plenty of 'Commic' Terns around, but I had no hope of seeing a bird that was about 20 cms long about ten miles away.

So, I gave it up. The bird may well have been there, but I was foolhardy if I thought I would be successful.

I went via Staines Reservoir on the way home and met up with Franko Maroevic and Ken Purdey. Plenty of gulls around including a juvenile Little Gull on the north basin. Other birds of interest were a Common Sandpiper and a Wheatear on the west bank of the south basin. 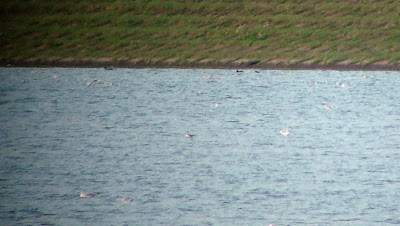 I'm working in London all day tomorrow, so let's hope Friday brings something local, and not on a reservoir the size of Lake Superior, to shout about.
Posted by Factor at 20:43